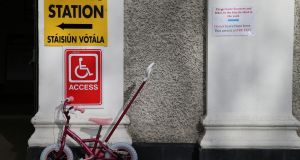 In attempts to explain the causes of the unprecedented result of the general election, some commentators have suggested the outcome was built on the foundations of the referendums on same-sex marriage and the eighth amendment.

It has been argued by some that young voters – feeling energised by the social change delivered through those campaigns – have become increasingly politicised and more eager to drive further change through the ballot box.

This is an appealing narrative to explain what happened in our most recent election. However, it is fundamentally flawed. Young people are no more politically engaged now than they were previously.

The increased turnout for the eighth amendment referendum was a temporary phenomenon. Turnout levels are now back to where they were at the time of the 2016 general election.

Using data gathered through the exit polls conducted for the 2016 and 2020 general elections, as well as for the referendum that led to the repeal of the eighth in 2018, it is possible to understand the profile of voters who turned out on each occasion.

Analysis of the data shows that 18- to 24-year-olds were more likely to vote in the referendum to repeal the eighth. Voter turnout among women aged 18 to 24 increased by 94 per cent for that referendum compared to the 2016 election.

However, the exit poll for this month’s election suggests this may have been a temporary phenomenon and that the age profile of voters reverted back to where it was in 2016.

The Oxford Dictionary’sword of the year in 2017 – youthquake – has been widely used over the past 10 days. This is defined as “a significant cultural, political, or social change arising from the actions or influence of young people”. It has been associated with a number of elections in various countries in recent years suggesting that young voters have mobilised in unprecedented numbers to support opposition parties.

It is only when this older group is convinced by a particular argument that electoral success will follow. This was the case in the eighth amendment referendum, when those aged over 50 voted as a whole in favour of repeal.

It was also the case in the recent general election, with over 50s voting for change.

The exit poll finds that Sinn Féin’s highest vote share was among those aged under 35, with 32 per cent casting their first preference vote for the party (up from 21 per cent in 2016).

As this age group represents roughly a third of all voters, extrapolating the exit poll data suggests that those aged under 35 accounted for less than 65,000 of the additional votes Sinn Féin received on February 8th.

In contrast, while the party received a lower share of votes (18 per cent) among those aged 50 or older, this is a much larger group of voters and accounted for half of the additional 240,000 votes.

It is only through motivating a sizeable proportion of voters aged 50 and older to vote for the party that Sinn Féin achieved the unprecedented success seen in this election.

In seeking explanations for the recent political shift it is necessary to take a wider focus than looking solely at young voters and the issues that influenced their vote. The result of this election was less of a “youthquake”, but more the manifestation of a desire for change across the electorate as a whole.