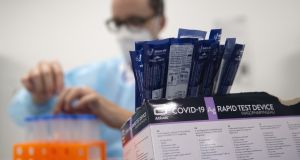 Nearly one in five people who have tested positive for Covid-19 are diagnosed with a mental illness such as anxiety, depression or insomnia within three months of testing positive for the virus, according to a study that suggests action is needed to mitigate the mental health impact of the pandemic.

The analysis - conducted by researchers from the and NIHR Oxford Health Biomedical Research Centre - also found that people with a pre-existing mental health diagnosis were 65 per cent more likely to be diagnosed with Covid-19 than those without, even accounting for known risk factors such as age, sex, race, and underlying physical conditions.

“This finding was unexpected and needs investigation. In the meantime, having a psychiatric disorder should be added to the list of risk factors for Covid-19,” said Dr Max Taquet, an NIHR academic clinical fellow and one of the authors of the analysis.

The calculations were made on the basis of roughly 70 million US health records, including more than 62,000 cases of Covid-19 that did not require a hospital stay or an emergency department visit.

The incidence of any diagnosis of mental ill-health in the 14 to 90 days after a Covid-19 diagnosis was 18.1 per cent, including 5.8 per cent that were a first diagnosis.

In order to examine whether the excess risk was directly associated with Covid-19, the researchers compared data with six other conditions over the same period: influenza; other respiratory tract infections; a skin infection; gallstones; urinary tract stones; and the fracture of a large bone.

In the three months after Covid-19 diagnosis, 5.8 per cent of patients had their first recorded diagnosis of psychiatric illness, compared with 2.5 per cent to 3.4 per cent of patients in the comparison cohorts - almost a doubling in risk, according to the paper published in the journal Lancet Psychiatry.

Paul Harrison, a professor of psychiatry at the University of Oxford, said more research was needed to establish whether a diagnosis of a psychiatric disorder could be directly linked to getting coronavirus.

General factors that influence physical health were not captured in the records analysed, such as socio-economic background, smoking, or use of drugs. There was also potential that the general stressful environment of the pandemic is playing a role, he noted.

“Equally, it’s not at all implausible that Covid-19 might have some direct effect on your brain and your mental health. But I think that, again, remains to be positively demonstrated,” said Mr Harrison.

A particularly concerning finding was the doubling of the diagnosis of dementia - which is typically irreversible - three months after testing positive for Covid-19, versus the other health conditions.

It may be that coming to a hospital or to see your doctor to get diagnosed with Covid-19 allows for other pre-existing conditions - such as dementia - to be diagnosed, noted Mr Harrison.

“Having said that it’s not at all unlikely that there may also be a brain effect of the virus in certain people that is going to cause certain more neurological symptoms and difficulties,” he said. “So, we’re particularly careful in not over-interpreting that association.”

Studies researching the impact of the virus on the brain and the central nervous system are under way, including one by scientists in the UK who have formed a partnership to explore the neurological and neuropsychiatric complications of Covid-19.

In July, neurologists published details of more than 40 UK Covid-19 patients whose complications ranged from brain inflammation and delirium to nerve damage and stroke.

Only time will tell whether the incidence of psychiatric illness post-Covid-19 continue to rise or persist beyond the three-month period, the researchers added.

“It’s difficult to judge the importance of these findings - it may be unsurprising that this happens a bit more often in people with Covid-19, who may understandably have been worried that they might become seriously unwell and who will also have had to endure a period of isolation,” said David Curtis, an honorary professor at University College London and Queen Mary University of London, who was not involved in the study.

“Overall, the results reported seem broadly plausible, but I’m not sure that they have specific implications for patients or health services.” - Guardian