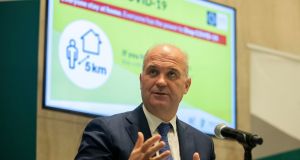 Chief medical officer Dr Tony Holohan said on Monday that once a safe and effective vaccine was available, Ireland would be able to organise the distribution of supplies. Photograph: Colin Keegan, Collins Dublin

Public health officials have cautiously welcomed news that a vaccine being developed by Pfizer could be more than 90 per cent effective, while airline and hotel stocks soared on the announcement.

Based on its population share, Ireland is in line to receive more than two million doses of the vaccine, if approved, under the terms of a collective supply deal being negotiated by the EU with Pfizer. A proportion of these doses could be made available by the end of this year if, ultimately, emergency authorisation is given by regulatory bodies.

Chief medical officer Dr Tony Holohan said officials needed to see reliable data made available to regulators and published in the scientific literature. “We’re hopeful but it’s certainly not a time for celebration,” he said, adding that people needed to stick to the basic public health measures.

Once a vaccine was available and its effectiveness and safety known, Ireland would be able to organise the distribution of supplies as part of joint procurement arrangements with the EU, he said.

Dr Holohan said a lot of “anticipatory planning work” has gone on behind the scenes in advance of the arrival of a vaccine and “when the time is right we’ll set out the details”.

“Certainly it’s positive. At over 90 per cent effective, if that holds true in the real world it will be a very good start,” Dr Cillian de Gascun, director of the National Virus Reference Laboratory, told a Nphet briefing.

He pointed out that the Pfizer vaccine posed a number of supply challenges, as two doses are required and the doses must be maintained at extremely low temperatures.

One more death was reported by Nphet last night, along with 270 new cases, the lowest daily number since late September.

Ministers are likely to discuss Ireland’s ongoing Covid-19 restrictions at Cabinet this morning as a memorandum on the new European traffic light system is among the items on the agenda, sources said.

Among the major decisions required in the coming weeks by the Government is what level of travel restrictions are in place for Christmas, when several hundred thousand people would normally arrive in Ireland for the holidays.

More generally, there are intensive discussions going on in Government about reopening after the lockdown ends at the beginning of December.

The new vaccine is expected to be submitted to authorities for emergency approval in the third week of November.

European Commission president Ursula von der Leyen said yesterday it would “soon” sign a contract with Pfizer for up to 300 million doses.

Anthony Fauci, the head of the US National Institutes of Health, described 90 per cent effectiveness as “just extraordinary”, but US president-elect Joe Biden urged caution, stressing that the end of the battle against Covid-19 was “still months away”.

The details released by Pfizer comes from the first formal review of the data by an outside panel of experts. Out of the 43,000 trial participants, the first 94 who were infected enabled the independent evaluators to calculate the effectiveness after two doses.

The announcement by Pfizer and its partner BioNTech sparked big rises in share values in sectors that have been depressed during the pandemic. On the Irish stock exchange, Ryanair shares rose by 14 per cent while Dalata, the State’s biggest hotel group, finished the day more than 30 per cent ahead. “This is good news for the world and will give a big lift. There is a lot of pent-up demand, particularly in our sector,” said Pat McCann, the Dalata chief executive.