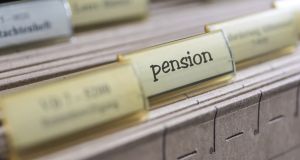 Even before it meets for the first time the Pension Commission is in danger of becoming a monster. Its terms of reference have expanded wildly beyond its initial purpose. Photograph: iStock

It was conceived as a get-out clause for political parties caught unawares by the depth of feeling over the rising age at which people qualify for the State pension. But even before it meets for the first time the Pension Commission is in danger of becoming a monster. Its terms of reference have expanded wildly beyond that initial purpose.

It will now essentially go back to square one and examine the viability of the State pension in terms of how much it costs, how it is funded, who gets it, how much they get and when.

It will looks at what other countries are doing, and at a series of reports that have done pretty much all of the above in Ireland over the past decade or so – oh, and it will report back by June next...hopefully.

There are no new answers to the dilemma of funding the State pension in the Republic. The population as a whole is growing older and living for longer. That makes the cost of pension arrangements as they stand unsustainable – if not now then shortly.

The choices are equally well known: start paying it later in life, increase taxes on everyone to fund it, make it means tested, or some formula combining all three.

Rather than wasting time covering well-ploughed old ground the Government and the commission would do better to focus on what appears to be a clearly identifiable issue. The thing that seems to have rankled most for people was the “indignity” of being forced out of employment and then obliged to sign on the dole to bridge the gap to a pension, living the lie of “being available for work”.

Before the commission even starts the politicians had already come up with a pragmatic compromise. An early retirement allowance payable to those choosing to or forced to retire until they hit pension age “without a requirement to sign on, partake in any activation measures or be available for and genuinely seeking work”.

Alongside simple legislation outlawing private employment contracts arbitrarily imposing pension ages at odds with the State pension, you have a compromise that deals with the real issue and could have saved the State a fortune in funding the commission.