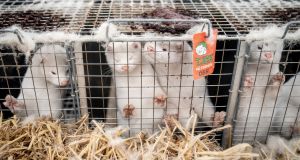 Live minks to be processed to fur, at a fur farm near Naestved, Denmark, on Friday. Photograph: EPA

All passengers arriving into the State from Denmark will have to restrict their movments for 14 days without exceptions following an outbreak of a new strain of the coronavirus connected to Danish mink farms, the Department of Health has confirmed.

There will be no exemptions for people travelling from Denmark with even essential workers being asked to restrict movements.The HSE will also conduct serial testing of Irish mink farm workers and their household contacts.

In a statement, the Department of Health said the mutation of the virus which had appeared in Denmark had not yet been identified in Ireland. There are currently three active mink farms operating in Ireland - in Donegal, Laois and Kerry – but no minks have been imported into Ireland in 2020, said the department. Testing at all three mink farms will be carried out to see if the virus is present in these settings and surveillance of the farms will continue, it said.

Minister for Transport Eamon Ryan said: “People will have to self-isolate for 14 days no matter what. People coming from Denmark, there isn’t huge numbers, but we are following the health advice, similar to what’s going on in the UK.”

The decision to further restrict travellers from Denmark follows a meeting on Friday between health officials, the Health Protection Surveillance Centre, the National Virus Reference Laboratory (NVRL) and the Department of Agriculture to discuss the transmission of the virus from humans to mink and vice-versa.

NVRL director Dr Cillian De Gascún told RTE Radio on Saturday that travellers from Denmark would be “treated differently” under the EU traffic light travel system but that the Irish State was not following the UK which has introduced legal requirements for people arriving from Denmark to quarantine.

Asked what travel measures would be taken in response to the spread of the mutated coronavirus strain from Danish mink farms, a DFA spokeswoman told The Irish Times that Denmark would continue to be flagged as a red country through the European Centre for Disease Prevention and Control’s traffic light mapping system and would be reviewed every Thursday.

Minister for Health Stephen Donnelly was contacted by the Northern Irish health minister Robin Swann after the North announced changes in travel regulations to include a new legal requirement for people to self-isolate for two weeks if they had returned from Denmark since October 23rd.

First Minister Arlene Foster said she spoke with the Taoiseach about implementing a joint approach.

It follows the UK’s announcement of a ban on visitors from Denmark arriving into all UK airports or ports in response to concerns over outbreaks of coronavirus on Danish mink farms. UK citizens will still be able to return from Denmark but must self-isolate upon arrival.

In a statement on Saturday, the North’s department of health underlined that any person who had travelled from Denmark to the UK, including Northern Ireland, in the past fortnight was now legally required to self-isolate for 14 days along with all other members of their household.

Dr de Gascún noted that his main concern was the mutated strain of the virus, which has appeared in Denmark, could impact vaccines which are set to be rolled out over the next six to 12 months. The new strain of the virus is not as susceptible to antibodies that could neutralise the virus, he added.

However, given the relatively low number of travellers arriving from Denmark, Dr De Gascún said the Government did not expect the mink outbreak would become a significant issue but that the situation would be reassessed if there was an escalation.

Denmark has announced strict new lockdown rules and a nationwide mink cull after authorities discovered a mutated coronavirus strain in the animals.

The UK has now imposed a total ban on visitors from Denmark, with the exception of hauliers and freight. It said there would be no exemptions to the quarantine policy and that any person who had returned from Denmark in the last two weeks would be contacted to ensure they complete the self-isolation period.

Northern Ireland’s Chief Medical Officer Dr Michael McBride said self-isolation was now a “mandatory requirement” for those who had travelled from Denmark and that the rules applied to all members of the affected household.

Dr McBride said the situation in Denmark was an “emerging picture” but that a “precautionary approach” was required at this early stage. He said the department was liaising closely with colleagues in Britain and the Republic on the issue and that Mr Swann had been in contact with Stephen Donnelly.

“The UK authorities are working closely with international partners to understand the changes in the virus that have been reported in Denmark,” he said “A programme of further research in the UK will inform risk assessments.”

In Denmark, more than 17 million minks are to be culled and there will be “population-wide mass testing” of the virus in the region of North Jutland where eight human cases have been linked to the mink farming industry.