Prudent to dispose of animals under supervision of officials, says Veterinary Ireland 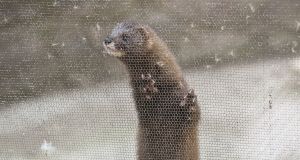 More mink is produced in Denmark than anywhere else. File photograph: Getty

The discovery of a new strain of Covid-19 in Danish mink has sparked calls for humane culling of the animals in Ireland, particularly as fur farming is due to be phased out.

Veterinary Ireland (VI), the umbrella organisation, said it would be prudent to dispose of the animals under the supervision of Department of Agriculture officials.

Dr Mark d’Alton, who was involved in the VI campaign to end the practice, said it “would be urging that on the precautionary principle, and bearing in mind that fur farming is going to be phased out anyway . . . that they should be humanely killed and the whole process expedited. That would be wise.”

However, he said he did not know what, if any, threat the mink posed here following the infection of 12 people in northern Denmark from a mutant form of the virus.

No infections have been linked to the three farms operating in Ireland. Last year the government committed to ending the practice citing veterinary evidence that it was “counter to good animal welfare”.

More mink is produced in Denmark than anywhere else. In the north of the country, the mutated strain of Covid has led to the effective lockdown of several towns in an attempt to halt its spread.

There are concerns the latest strain of coronavirus could negatively affect efforts to secure effective vaccines. But Dr Gerald Barry, assistant professor in virology at the UCD School of Veterinary Medicine who specialises in zoonotic infection – passing of disease from animal to human populations – said the discovery of a new strain in itself is unsurprising.

“The bigger finding is that mink infect humans,” he said. “That creates a kind of Pandora’s box around animals infecting humans and the possibility of animal reservoirs.”

Such reservoirs, he explained, could make it far more challenging to eradicate the virus than if it was specific to humans. Smallpox was eradicated in part because it did not find a footing among animals capable of returning it to the human population.

Dr Barry said that while caution and vigilance are required with respect to the Danish variant – four strains known collectively as “cluster five” – such mutations are expected and just as likely to occur within humans.

He downplayed reaction to the Danish situation, saying there was no evidence yet to suggest the strain was more dangerous than those already identified or in circulation.

“It slightly reduces the efficacy of the antibodies [that combat the virus]; it doesn’t mean they aren’t working,” he said of the immune response.

“Obviously it’s a very small amount of people [affected in Denmark] but they haven’t noticed anything particularly unusual about it above any other version that is circulating in the world at the moment.”

Nevertheless, Denmark is now undertaking a massive cull of up to 17 million mink.

The situation has prompted a ban on travel from Denmark into the UK. Here, the Government has said that until further notice passengers arriving from Denmark are requested to self-isolate for 14 days.

No cases to date

The Department of Agriculture said it has maintained contact with Irish mink farms and while a testing regime is to be implemented, no Covid cases have been identified to date.

Mink, similar to ferrets, cats and dogs, are more susceptible to contracting the coronavirus, posing a risk they could mutate the virus and return a variant to humans.

“Since June, the Danes had implemented a phased response to controlling the spread of the disease with a limited cull of infected [mink] farms,” said the department. “The recent developments in Denmark in relation to potential impact on future vaccine efficacy is of concern.”

It said it has written to mink farms in Ireland on a number of occasions this year and provided information on Sars-CoV-2 infection and biosecurity measures to prevent mink being exposed to the virus.

Dr Ann Moore, from the School of Biochemistry at University College Cork, said there would hopefully not be any implication for vaccine development but that it was important to eliminate the source.

“The worry is that that virus will be more deadly or will transmit more easily from person to person and secondly that a vaccine would not protect against [it],” she told RTÉ radio on Monday.