Permanent TSB needs to scale up to succeed 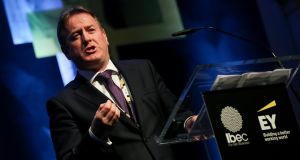 Permanent TSB (PTSB) is the last of the five banks in the State to come out of the traps this year with a plan to cut jobs, confirming on Friday that it plans to eliminate 300 roles, or 12.5 per cent of its workforce. But it is probably the most in need of finding some savings.

PTSB has been dogged consistently by the lowest level of profitability – measured by return on equity – in the sector.

This is the result of the bank’s almost singular focus on mortgages, more than half of which are low-yielding loans that track the European Central Bank’s main rate; the small size of its balance sheet following 12 years of shrinkage; comparatively higher regulatory and running costs; and lower reliance on fee income than rivals at a time when lower-for-longer rates and muted loan growth are squeezing incomes across the sector.

The 75 per cent State-owned bank’s return on equity last year was 3 per cent – about a third of the level of what would generally be considered a healthy lender.

The Covid-19 economic shock has resulted in new lending at the bank falling 23 per cent so far this year to €900 million. It has also forced the lender to set aside €87 million to date for an expected surge in bad loan losses.

The bank’s chief executive since June, Eamonn Crowley, signalled last week that he was prepared to take action – announcing the planned sale of €1.4 billion of boom-time mortgages on interest-only terms in an effort to release €200 million of expensive capital.

But even if a merger with Ulster Bank is off the cards, Crowley must surely be eyeing parts of his rival’s business.

For PTSB to ultimately have a proper long-term future, it needs greater scale.