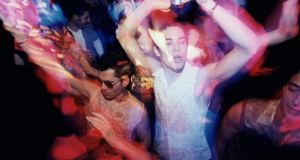 “Over the past year, I’ve taken G and had sex at parties about once a month,” says Bill*, who is in his mid-30s. “A friend told me about it and, like both straight and gay people, we had experimented with sex and ecstasy over the years.

“Sex on [GHB] means you have less inhibitions and feel less insecurity and paranoia. The sexual sensations become much more intense; even having your arm or back touched out can give your whole body an intense sensation. Sometimes we might take half a pill [ecstasy tablet] with it.”

Clinicians have warned that taking more than one drug at once can be particularly dangerous, although the most hazardous drug to mix with GHB, by far, is alcohol.

“The men I do it with are all between their mid-30s and early 40s, and we are informed about what we are doing,” says Bill. “I do know, from talking to others, that there seems to be more responsibility about use of G and other drugs here than there is in London.”

“He was standing up, talking away, and suddenly his legs went out from under him. We sat him down, made sure he was breathing, and got him water. He came around shortly afterwards, but we would have called an ambulance for him if he didn’t.”

Some GHB users, along with a number of professionals and campaigners working in the area of drugs and sexual health, have expressed concern that stigmatising users of the drug, or condemning their consumption, could lead to situations where emergency services are not called when someone needs urgent medical attention.

“We are also acutely aware of consent,” says Bill. “It has happened that people can pass out and wake up with someone on top of them, but not with us. There is a core group of six or seven, and we might meet once a month but then, come Sunday, we sit and chat. If someone is new to the group, I’ve told them not to do anything they’re not comfortable doing, and that they won’t be judged for it.

“There’s quite a mix of backgrounds and nationalities. Some of us are professionals, one of the participants is a doctor, some work in shops or bars and some are students.”

“The drug use can also become habitual for some people and mentally addictive. I gauge my own moods and if I’m suffering from low mood, I might give it a rest, eat well and stay hydrated,” he says.

“Media reports can be very demonising and only tell of the negative side, and there is a strong thread of disapproval from within the gay community itself. But it doesn’t speak to a lot of people who take these drugs anyway, have had largely positive experiences and just want good, reliable information about how they can stay safe.”

*Name has been changed