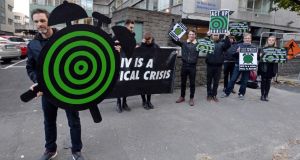 People with the group Act Up Dublin calling on the Government and stakeholders to address the HIV crisis on the eve of World Aids Day last November. Chemsex activity increases the risk of sexual infection. Photograph: Eric Luke

Sex and drugs have long since been connected. The two are mostly combined by heterosexual people, and the majority of those taking drugs to enhance their sex lives are healthy and addiction-free.

The latest drug to fall under the spotlight has been GHB – more commonly referred to as G – an industrial solvent often used for cleaning alloy wheels which has been found to enhance sexual pleasure.

Last month, a survey of 486 men who attended the Gay Men’s Health Clinic (GMHC) on Baggot Street in Dublin found that 27 per cent had taken G or, less commonly, cocaine, ketamine, crystal meth or mephedrone (a drug which used to be freely available in head shops).

The findings suggested that men who engage in chemsex may be at higher risk of STIs. However, it does not show that drug use is the only cause of rising infection rates.

“We don’t have any evidence that chemsex is related to the rise in HIV, although the study did find that men who engaged in chemsex were more likely to have chlamydia or gonorrhoea and to have been treated for them within the past year,” says public health doctor Ronan Glynn, who authored the Baggot Street study.

“The survey also raises serious issues around consent. We also have to be aware that chemsex is something that heterosexual people engage in, although they might not use that term. And we know that young people in Ireland have the highest rates of drug use in Europe. ”

Dr Glynn stressed that the findings of the survey represent just a small subset of the MSM population in Ireland. There are many gay men who do not attend sexual health clinics, either because they are in committed relationships or not having frequent or risky sex, he added.

Adam Shanley, director of the Gay Switchboard, a telephone helpline for LGBT people, has been working closely with the HSE to tackle sexual health issues in the State.

“We now know from this study that around a quarter of surveyed users have lost consciousness or seen their partner pass out,” he said. “We know that some of the people who are using G are ending up in ICU. And we also know that a large majority, 75 per cent, are in control of their drug use and are enjoying their sex life.”

Siobhan O’Dea, manager of the Gay Men’s Health Clinic, said that men who attend the clinic – both for routine screening in response to risk or because they are entering a new relationship – are taking responsibility for their own sexual health.

“This is only a problem for a minority of people,” she said. “I’m not normalising it, but sex and drugs have been there for thousands of years, and most heterosexual or gay people don’t have problems with them, but a small percentage do and we are here to help them.”

The HSE is rolling out a three-pronged campaign around the use of G. It consists of posters in pubs, clubs and other spaces frequented by MSM (such as LGBT resource centres) which contain harm-reduction information. People will be told it is safest not to take the drug at all, but if they do, there is vital information for use in the event that they or a friend pass out. The posters will be in English and Portuguese, because a lot of G users are Latin American.

There will also be a “G-card” which can be carried by users and will provide vital information for emergency services and a full information booklet.

Dr Paddy Mallon, a HIV researcher at the Mater hospital and at UCD, said that the use of drugs for arousal is not a new phenomenon – pointing to acid use in the 1960s or ecstasy in the 1990s.

He is concerned, however, that awareness of risks seems to be in decline, and says chemsex may be one of the factors involved. “This could be because STIs are now regarded as treatable, but HIV is a chronic lifelong condition and people who get it have significant issues. We need to get this message across without stigmatising or making them afraid to find out their status.”

The 2015 MISI (men who have sex with men internet survey Ireland) report found that 18-19 year olds had the poorest sexual health knowledge, suggesting that college-age people are learning about sex not in school, but through life experience and the internet.

Like other clinicians, Dr Mallon says chemsex is an issue that must be placed in the context of a wider discussion about sexual health and education.

“There are some good programmes in schools but, in a modern, structured curriculum, we have to be teaching young people more than just the biology, chemistry and religion around sex; we also have to give practical advice to them, to enable them to make safe choices.

“Campaigns around healthy eating and alcohol awareness take place at school so, if we want a healthier population, why don’t we have same conversations about sex?”

Separate from the issue of chemsex, Dr Mallon, Mr Shanley and a number of campaigners and researchers interviewed for this article are among those who want to see the rollout of PrEP (post-exposure prophylaxis, a preventative HIV drug taken before rather than after sexual activity).

Evidence from the UK and other countries shows that, along with public health campaigns and contraceptive use, it reduces the incidence of HIV infection. There is a demonstration of PrEP planned for this year, according to Minister of State for Health Promotion Marcella Corcoran Kennedy.

Dr Thomas Strong, an anthropologist at Maynooth University who has carried out research into young people and sexual health and who is HIV positive, said the State authorities may well be starting to notice that old policies around drugs and sexual health are failing.

“This has been neglected for too long,” he says. “Maybe, between a move to allow drug-injection centres and medicinal marijuana, roll out PrEP and a harm-reduction approach to G, Ireland is realising it is time for a rethink.

“We read so much about the dangers and might wonder why anyone would take part in chemsex. But we know from research and from our own human experiences that people do these things because it enhances pleasure, allows them to communicate and, maybe, because they find it fun. That’s to acknowledge what motivates people, not to downplay the dangers. I personally know people who have had terrible experiences on G.”

In the UK, there have been a few cases where, when someone “goes under”, the other people at the party panic. Instead of putting them in the recovery position or calling an ambulance, they throw them out on the street.

Mr Shanley cautions against drawing too many parallels between the chemsex scenes in Dublin and London. “That isn’t happening here, and there’s a reason: Dublin has a much stronger sense of community and it is a much smaller scene. People know each other, and we look out for each other. That bodes well for how we can tackle this problem.”

- 50 per cent rise in all gonorrhoea notifications this year. Some forms of gonorrhoea are becoming immune to most antibiotics

- 29 is the average age of the survey respondents

- 37 per cent of MSM have never tested for HIV, according to the 2015 MISI survey

- GHB converts to GBL in the human body, which is why it is more commonly just called G