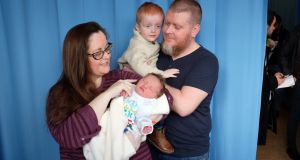 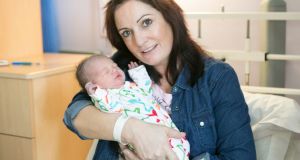 Gloria O’Grady, from Patrickswell, Limerick, holds her new baby girl Lily who was born at 12.01am in the University Maternity Hospital Limerick, weighing a healthy 7lb 4oz. Photograph: Liam Burke/Press 22 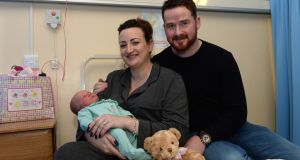 Judy Turley with baby Molly, who was born at 12.19am at the National Maternity Hospital, and husband John from Palmerstown, Dublin. Photograph: Dara Mac Dónaill 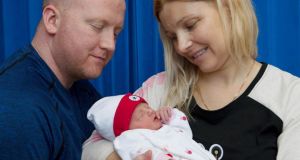 Madison Jessica Moran, who was born in the Rotunda Hospital on New Year’s Day at 1.37am, with proud parents John Moran and Malgorzata Bialek-Szymanska from Navan. Photograph: Peter Houlihan

There was stiff competition for the title of first baby born in the State this year, with a pair of twins born within the first six minutes of 2017 among the contenders.

The first of the brothers was born just a second after midnight, according to the Rotunda Hospital in Dublin.

The 2.6kg boy was joined by his 2.8kg sibling six minutes later.

Limerick’s University Maternity Hospital had another early arrival with Lily Mary Eileen O’Grady born at 12.01am.

Her parents, Declan and Gloria O’Grady, from Patrickswell, said they hoped she would be “the first of many”.

Back in Dublin, the parents of Arlo River Elias Kenny thought he was in with a good chance of being the first baby of the year when he was born about 50 seconds after midnight at the National Maternity Hospital on Holles Street.

“I said to the girl after he was taken out ‘what was the time?’ and she said 50 seconds into the new year. So I said ‘do we win?’,” said Arlo’s father, Elton Rooney from Clonsilla in Dublin 15.

The timing of the 3.9kg baby’s birth came as something of a surprise for Mr Rooney and the boy’s mother, Stacey Kenny, given it was three weeks ahead of his due date.

Asked about Arlo’s name, Mr Rooney said that he had pushed for a more left-field option to complement the name of Arlo’s three-year-old brother Axel, named in honour of the Guns N’ Roses frontman Axl Rose.

“I desperately wanted to call him Slash, but it was ruled out. I was reminded he has to go to school in this country, so that was it.”

Ms Kenny said there would always be fireworks on Arlo’s birthday, which will serve as a throwback to the din around the city centre hospital at the time of delivery. “He’s been absolutely a dream, just sleeping and drinking. Perfect,” she said.

The Coombe hospital in Dublin welcomed its first baby of 2017 at 7.45am.

Parents Rose and Ben Waldron from Kilcock, Co Kildare, have yet to name their baby, who weighed 3.2kg.

In Limerick, Áine Laffan delivered her son Odhran on her kitchen floor in Lisnagry. She had wanted a home birth, but did not expect Odhran, who was born three weeks ahead of his due date, to come so soon.

“I’m feeling great, tired, but great. I’ll never forget it,” said Ms Laffan. “We’ll never be able to look at the spot on the floor in the same way.”

Odhran’s father, Denis Kelly, made a late-night dash from his family home in Roscommon to be with Áine for the birth. “I got down around 12.30am, and Áine woke me at 3.40am. I caught [Odhran] as he came out, and the ambulance arrived 10 minutes later,” Mr Kelly said.

“We had wanted a home birth but we didn’t think it would happen like it did. He still came at our home.”