Number of patients on trolleys set to increase even further 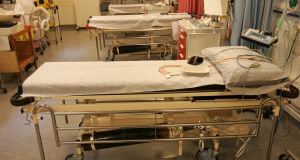 The number of patients staying on trolleys in Irish hospitals is expected to increase having reached a new record high yesterday. Photograph: Frank Miller

The number of patients staying on trolleys in Irish hospitals is expected to increase, having reached a new record high yesterday.

Figures released by the Irish Nurses and Midwives Organisation (INMO) showed 612 patients were admitted for care and left on trolleys throughout the country.

A significant rise in influenza and winter-related illnesses has been cited as a major factor.

The INMO expects the situation to deteriorate further, noting a recent reduction in the “delayed discharge” of patients to historically low levels had not solved the crisis.

INMO general secretary Liam Doran said: “It’s a disaster of unmitigated proportions as far as I am concerned and I don’t think it’s peaked.”

In an indication of the strain on hospitals, a queue of over a dozen ambulances was sighted on the grounds of University Hospital Limerick (UHL) as they waited to offload patients there.

According to sources in the ambulance service, a total of 16 ambulances – beleived to be the entire fleet for the mid-west – were not available to respond to calls, as they waited for their patients to be offloaded and signed into the emergency department (ED) at UHL

In a statement, UL Hospitals Group said it had “long acknowledged that the ED at UHL is not fit-for-purpose” and it was advancing plans for a modernised ED under the 2017 Health Service Executive national service plan.

It added “the Christmas/new year period has been exceptionally busy”, with daily attendance figures at the emergency department on three days last week of between 180 and 211 patients – 20-40 per cent above average.

“This can unfortunately cause delays to ambulances arriving at UHL. This evening there are 17 adults waiting in ED for a hospital bed.”

Mr Doran said Ireland’s capacity was at about 2.8 beds per 1,000 people compared to the Organisation for Economic Co-operation and Development average of 4.8.

“There is a solution if you accept our bed capacity is well below international norms.”

However, Minister for Health Simon Harris dismissed claims the situation had been predictable.

“Perhaps next time things are predictable people would tell us about them in advance. The reality is a huge amount of work was undertaken by the HSE, by the Department of Health and by a range of stakeholders,” he said at a briefing yesterday.

“But what nobody could prepare for is the level of flu outbreak that we’ve seen, the particular way in which it is impacting on our older citizens and the huge increase in attendance.”

1 One hundred Irish retailers for all your online Christmas shopping
2 Des Bishop apologises to Traveller community for comments in interview
3 Nearly 400 Brazilians have tested positive for Covid-19 in Ireland, data shows
4 Life under Level 5: What will the next six weeks look like for the State?
5 Gym owner plans to defy restrictions and open
Real news has value SUBSCRIBE