Threat of hospital bed closures as nurses vote for action 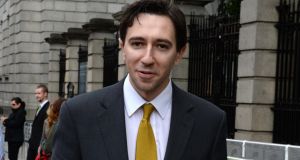 Minister for Health Simon Harris: industrial action “will not reduce the numbers of patients on trolleys in emergency departments”. Photograph: Dara Mac Dónaill 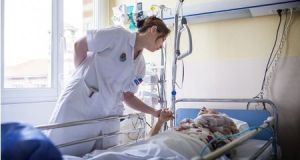 The Government has described planned strikes and industrial action by nurses and midwives over staffing levels and working conditions as “regrettable”. File photograph: Getty Images

Planned industrial action by nurses will, if it goes ahead, almost certainly lead to the closure of hospital beds and the curtailment of services from early February.

Such developments would also potentially exacerbate the existing serious overcrowding problem in public hospitals which saw 540 patients on trolleys at one stage this week.

The Government last night described the planned strikes and industrial action by nurses and midwives over staffing levels and working conditions as “regrettable”.

Minister for Health Simon Harris said industrial action was “not the solution” to the serious challenges the health service faces in relation to recruitment and retention of key staff.

Members of the Irish Nurses and Midwives Organisation (INMO) on Thursday voted by 90 per cent in favour of a campaign of one-day strikes and industrial action in a dispute over staffing and recruitment and retention issues in the public health service.

The union is to seek immediate talks with the HSE and Department of Health to agree “special measures” to address what it described as a recruitment and staff retention crisis in hospitals.

If no progress is made the union’s executive will meet on January 17th to set out a timetable for strikes and industrial action. Any industrial action would not take place until early February.

INMO general secretary Liam Doran said members had given the union a mandate for a mixture of one-day strikes and continuous industrial action.

“It will include no redeployment from one ward to another, no cross cover in the community, no overtime or no working additional hours. Essentially what it will do is to force management to contract services to that appropriate to the level of staffing available.”

The INMO said its planned industrial action would “inevitably lead to the closure of beds and the curtailment of services across the country”.

Mr Doran said the provision of financial incentives to encourage nurses working elsewhere to take posts in the public health system and those already working there to remain had to form part of the proposed new round-table talks with the Government and HSE.

Mr Doran did not specifically set out the level of financial incentives the union believed was necessary.

However, asked whether it should be along the lines of the €6,000 signing-on fees being offered by some Irish private hospitals to nurses, he said: “That is one of the measures that would be self-evidently required.”