Bernadette Scully ‘unlikely’ to be disciplined after acquittal 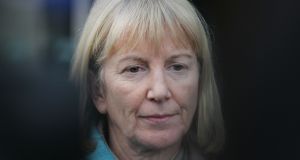 Dr Bernadette Scully is free to resume her career as a family doctor after being found not guilty of the manslaughter of her profoundly disabled daughter.

It is unlikely the 58-year-old Tullamore GP will face professional disciplinary proceedings following her acquittal at the Central Criminal Court, according to medical and legal sources.

One said it was “not inconceivable but highly unlikely” that the Medical Council would seek to bring her before a fitness to practise hearing.

Dr Scully remained calm as the jury returned the verdict of not guilty of the manslaughter of her 11-year-old daughter Emily Barut on September 15th, 2012.

It was alleged she killed Emily by an act of gross negligence involving the administration of an excessive quantity of chloral hydrate.

The edition of the Council’s guide to professional conduct that then applied says it is “not advisable” for doctors to treat members of their own family.

This has since been strengthened to say doctors “should not treat” family members, except in emergencies.

Dr Scully, who was also running a busy GP practice, grew increasingly exhausted as her daughter’s condition worsened, especially in the weeks up to her death.

Medical evidence given at the trial found Emily was at risk of a terminal seizure at any stage and that any one of her medical conditions was potentially fatal.

In a statement read on her behalf outside the court, Dr Scully said her struggle was mirrored in the lives of many others who are carers of disabled children and who struggled daily to get access to services and support systems “which very often are simply not there”.

Family Carers Ireland said the case showed the need for the burden of care to be more widely shared between carers, the State and the wider community, especially in the case of children and others who had very high dependencies.

“This category of carer suffers enormous burn-out, but they have to fight for every bit of help they get.

“They need home help, respite care, day centres and equipment to ease their load,” said spokeswoman Catherine Cox. She also called for a statutory entitlement to home care support for all carers.

Dr Scully’s trial heard that some of the help she received to care for Emily was taken away due to cutbacks.

The case also heard evidence about Dr Scully’s efforts to seek help within her profession as she began to, in the words of her defence counsel, “fall asunder” due to her care and work responsibilities.

A recent Medical Council survey found that one in five doctors in training believed they were in need of mental health support services and rated their quality of life as poor or very poor.

A spokeswoman declined to comment on the case but said the council has opened a dialogue with medical educators and policymakers on the issues of doctors’ health in response to the survey findings.

The HSE said that while GPs were not directly employed, it provided a variety of supports, including out of hours and sick leave cover.

“Support is provided on a case-by-case basis where required due to particular circumstances or critical illness etc, as necessary.

“There is also a healthcare professionals’ support scheme which GPs can avail of.”

The Irish College of General Practitioners, which Dr Scully contacted for help, declined to comment on the case.