Bernadette Scully: ‘Colleagues had the height of praise for her’ 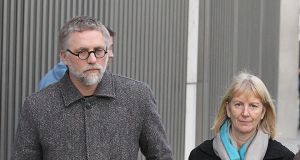 Andrius Kozlovskis and Bernadette Scully: the pressure on Scully grew and grew as her daughter Emily’s condition got worse. Photograph: Collins Courts

Bernadette Scully needed no introduction on the day she presented herself formally to gardaí in connection with the death of her daughter.

“It was very strange to be dealing with her at the counter,” one garda recalled afterwards. “Wasn’t she the GP for my own family?”

It was like that in the medium-sized midland town where Scully, though leading an unobtrusive existence up to the events of 2012, was known to most of Tullamore as a family doctor with a large and busy practice on Clonminch Road.

No one today has a bad word to say about her. “You couldn’t ask for anything more from a GP. She gave you time as well as knowledge; she never rushed you out the door,” says one local.

“She was a brilliant doctor,” says another man.

Fellow doctors, too, speak highly of the 58-year-old. “She was an excellent GP and had a very good practice,” one says.

“Colleagues had the height of praise for her. She was very well thought of in the local community and within her peer medical group,” says another.

Patients, it is reported, would rather wait days for an appointment with Dr Scully than see another doctor. A measure of her success can be gauged from the payments she received from the HSE under the medical card schemes; €549,818 in 2010, a gross figure from which staff and other operational costs for her surgery would have to be paid.

Husband turned out to be gay

Her patients all knew about Emily because Dr Scully talked about her a lot. “She never held back about the up and downs of her caring. You could see that Emily meant everything to her,” one recalls.

From a large family in Co Offaly, Scully lost her father early and provided care for younger siblings from a young age. She thought of becoming a teacher but opted for medicine after getting high points in the Leaving Certificate.

She studied in UCD and qualified in 1983. She worked as a junior doctor in Kilkenny, among other hospitals, before training to be a GP. She also spent time in England but returned to Ireland to work in the Border region as a family doctor.

Though her career was progressing, friends describe Scully at this time as being “unlucky with men”. In 1986, she married a fellow doctor and they set up practice in Tullamore. She later learned he was gay.

“I had got married in good faith,” she told her trial. “He was working in the practice as well and it was very difficult. It was a struggle.”

She likened the experience to being in a “goldfish bowl” though no one in the town raised the matter directly.

They parted eventually on amicable terms and Scully married again, to Turkish-born Haluk Barut, a chef working locally. She became pregnant after three cycles of IVF and Emily Barut was born, profoundly disabled, in 2001.

This marriage broke down in 2003 and she was left with her husband’s gambling debts and a €1 million Revenue bill, she told the trial. That spelled the end of her nest-egg and notions of retiring early.

In the witness box, Scully’s sister Teresa spoke about her strength and courage in caring for Emily.

She described her sister as a devoted, selfless and caring mother who was overjoyed when she was able to conceive Emily. “All Bernie ever wanted to do was to have a little baby of her own, and there was no one more deserving because all she had done, all her life, was give, give, give,” she said.

She said her sister was always a tower of strength and support to her and their family and went on to be just as supportive and strong for Emily.

Around 2007, Scully entered a relationship with Lithuanian composer Andrius Kozlovskis. He proved a reliable partner and was one of the few people skilled in feeding Emily, who had great difficulty swallowing.

Teresa Scully said her sister’s world “went black” when she discovered Emily would struggle in life, but she managed to “turn it around and her instinct was to care for her”.

She said she used her expertise as a GP to improve Emily’s quality of life. “She wanted her to be known as Emily the person, not the disabled child.”

This was confirmed by a nurse who gave evidence at the trial. She said the level of care Emily received was “100 per cent plus”, adding that it contributed to her ongoing survival.

Despite the widespread sympathy for her plight, Scully struggled to combine a heavy care load with running a small business. She had minders for Emily, but the burden of care remained with her and some of the assistance she had fell victim to cutbacks.

The judgment of some medical peers was not always as sympathetic as might have been expected. “The medical profession is very conservative and takes a dim view of people who don’t conform,” one explains.

“They are very judgmental and harder on their own than they are on other people. You would imagine they would be more compassionate but, by virtue of the fact that they are very competitive, any flaws would be perceived as a weakness.”

She approached the Irish College of GPs for help, and was referred to a psychiatrist. The psychiatrist said she was too young to give up work and suggested she put Emily into residential care during the week. Scully vehemently rejected this proposal.

The pressure on her grew and grew as Emily’s condition got worse. Her daughter needed operations to ease her pain and this necessitated her mother taking time away from the practice. There were tensions with the other doctors who grew concerned at her absences. Scully herself had to undergo a gynaecological procedure in Dublin at one point but still had to work on call that same night.

Finally, on September 15th, 2012, Kozlovskis discovered mother and daughter unconscious in their home on the day of Emily’s death.

Almost one million could be on hospital waiting lists by year-end, consultants warn