About 2,000 German patients to benefit as State continues to negotiate over price 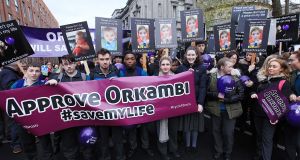 Protest in support of people with cystic fibrosis and the campaign for Orkambi drug therapy approval in Ireland at Leinster House earlier this month. Photograph: Stephen Collins/Collins Photos

Germany has become the latest country to provide free access to Orkambi, the cystic fibrosis drug that is the subject of controversial negotiations in Ireland.

About 2,000 German CF patients are to benefit after the manufacturer, Vertex Pharmaceuticals reached a pricing and reimbursement agreement with the German Statutory Health Insurance system.

Long-running talks on providing Orkambi to more than 500 Irish patients are due to resume on Tuesday between the HSE and Vertex.

According to the company, the German authorities recognised the “considerable additional benefit” of Orkambi for people with CF who have two copies of a particular mutation.

Under the German system, which differs from Ireland, new drugs are available to eligible patients on a one-year trial basis once they have been approved by the European Medicines Agency.

Orkambi is now available in Germany, the US and Austria, but authorities in Ireland, the UK and several other European countries have balked at its high price.

The treatment, which improves lung function and reduces hospitalisation for CF patients, would cost €160,000 per patient annually, or €400 million for the health service over five years, according to its initial price.

The HSE is willing to pay €75 million which would make it the sixth most expensive drug used by the Irish health system.

Welcoming the German deal on Orkambi, Cystic Fibrosis Ireland called for the Irish negotiations to be carried out in private and “not over the airwaves”. Chief executive Philip Watt urged both sides to make compromises in order to reach a fair agreement, which should include a “considerable reduction” in the price sought by Vertex.