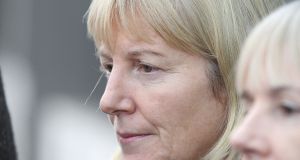 One of the issues raised by a number of witnesses in Dr Bernadette Scully’s trial was the fight for services for her severely disabled daughter. Photograph: Collins Courts

Family Carers Ireland has called for a statutory entitlement to home care support for all carers in the wake of the Dr Bernadette Scully case.

The support group said the case showed the need for the burden of care to be more widely shared between carers, the State and the wider community, especially in the case of children and others who had very high dependencies.

Dr Scully was acquitted on Friday of the manslaughter of her 11-year-old daughter Emily Barut after administering an excessive quantity of chloral hydrate in September 2012.

One of the issues raised by a number of witnesses in the trial of was the fight for services for Emily and the difficulty her mother had accessing supports.

“This category of carer suffers enormous burn-out, but they have to fight for every bit of help they get,” said Family Carers Ireland spokeswoman Catherine Cox.

The trial heard Dr Scully used to go to different places to try to learn how to care for her daughter.

“I found it hard to research on computers so I was going around talking to people,” she said.

She said that she and Emily used to spend two weeks, twice a year in the Bobath Clinic in London, a centre of excellence for children like Emily.

“They would suggest things. Then I’d come home and try to fight to get them,” she said in court.

The staff at the London clinic queried why she didn’t have a second skin. She didn’t know what that was and they explained that it was a lycra suit made exactly to fit her body. As she had low muscle tone, it would stop her body going floppy.

When she made enquiries about it at home, she was told it wasn’t available.

She said that when she pointed this out to one of the professionals working with Emily, she was told that at least she had growing room.

“When I showed it in the clinic in London to the man who had originally brought it there, he was so disgusted, he said: ‘I’m going to make you another one free of charge,” she said. “Now, they’re giving them to a lot of children in Tullamore.”

She said Emily loved the water, but that they couldn’t bring her swimming because the local pools didn’t have the facilities she needed. Instead, they got her special coloured lights and a jacuzzi for her bath. However, they couldn’t get her bedroom hoist into the bathroom.

They requested one from the HSE but never got it - so two people carried Emily into the bathroom every night.

The trial heard that Ms Scully had left work with burnout six months earlier, but had been forced back to work a few days before Emily died. She said people were “not queuing up to help you when you a child with special needs”.

She had sought help from her professional body, because she was worried about not concentrating at work, but said she hadn’t got anywhere.

She said had gone to a psychiatrist who, instead of signing her off work, had told her to upskill.That doctor had also suggested that she put Emily into residential care during the week and have her back at the weekend.

“She obviously didn’t’ realise how much I love Emily and Emily was going nowhere,” she said in court.

“Did I have respite? I didn’t have respite. Emily’s difficulties were too complex,” she said.

“I looked after parents with disabled children. I used to see the desperation in their faces,” she recalled. “I did not have one clue what it was really like until I walked in my own shoes.”

Noreen Roche, a nurse who was asked to assess the level and cost of ongoing care for Emily in 2009, said she was dependent on her mother for all aspects of her life. “She was fully cared for in an exemplary manner,” Mr Roche wrote.

In the same report, she noted Dr Scully, besides caring for Emily, was working from 2.30pm to 7.30pm at her doctor’s practice. She had no help with administration or paper work. She was suffering from back problems but did not have time to see a physiotherapist or do strengthening exercises.

Ms Roche further noted that due to cutbacks, help from the Centre for Independent Living had been withdrawn. Her report stated that her home was not suitable for Emily’s needs and a specially designed home was needed.