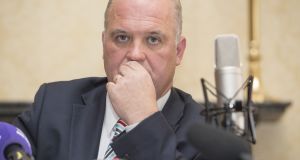 Dr Tony Holohan says entry screening, as it is carried out in some jurisdictions, is not done in Ireland and ‘would be a waste of resources’. Photograph: Dave Meehan

“Entry screening” for Covid-19 “doesn’t work, wouldn’t work” and would be a “waste of resources”, the chief medical officer has said.

Dr Tony Holohan was speaking after it was reported that two Irish people who had been passengers on Westerdam, a cruise ship which is now quarantined, had returned to the country last weekend without being screened.

While he would not be drawn on individual cases, he said entry screening, as it is carried out in some jurisdictions, is not done in Ireland. Often this involves screening inbound passengers for high temperatures, but he said this would not be a good use of resources.

Speaking at the Department of Health on Wednesday, he said Ireland’s approach was to ask people coming from affected parts of the world to make contact with their GP or health authorities, and get advice as to what to do from there. Health authorities then identify a course of action deemed appropriate, which may involve testing or a period of self-isolation. Generally those without symptoms are not tested, he said.

He said high-risk cases are being identified and tested, arising from the processes and protocols Ireland had put in place.

“It’s not as if we’re not picking these up; 78 people so far have been the subject of that assessment and have been put into those kind of arrangements where testing has been done, and that testing has turned out negative in each of the cases so far.”

Dr Holohan said the public health service was examining a wide variety of information on potential contacts with people who may be high risk, for example on an airliner.

“All that information is trapped and made available to the public health people and that provides them details in terms of contact training.”

He said that contact with passengers on aircraft was a feature of nearly every suspected case or high-risk case that had occurred in the country, due to how people enter the State. Information about how long a person potentially infected was on a flight, as well as who was sitting close to them, is gathered from passenger manifests and analysed, he said, and people may be contacted depending on the result of this process.

Dr Holohan also said he expects cases of coronavirus in Ireland, but has expressed confidence in the State’s capacity to handle the virus without it spreading among the population.

Speaking at the Department of Health yesterday, Dr Holohan said “it’s not a certainty that a case won’t occur, we’ve been saying all along, we expect to see a case at some point, and it’s not going to change our public health management”.

He said there are “no loopholes” in the global, European or Irish approach to combating the spread of the virus, which emerged earlier this year in mainland China and has spread – albeit in smaller numbers – to dozens of other countries since then.

“If a case were to get through, it wouldn’t mean that our system had failed. We’re expecting to see cases. What’s much more important from our point of view is can we be confident that even if we do get a case, we have a high likelihood of putting in place containment measures that prevent this case from passing on to other people in our community and become established in terms of community transition.

“We have confidence about that, but not certainty,” he said.

Dr Holohan was speaking after it was reported that two Irish people, who had been passengers on a cruise ship which is now quarantined, had returned to the country last weekend without being screened.

Meanwhile, hundreds of passengers aboard the quarantined Diamond Princess cruise ship docked in Yokohama, Japan, walked on dry land on Wednesday for the first time in two weeks.

Two Irish citizens who were on board the cruise ship had tested positive for the coronavirus and are being cared for at a military hospital in Tokyo having been transferred from the ship to the hospital on February 16th.

They were among six Irish citizens on board the ship. About 500 passengers were expected to leave the ship by the end of Wednesday after an ordeal in which more than 540 of the 3,711 people on board were infected with the potentially fatal disease – the largest cluster outside China.