Cases tested in Dublin, Cork, Limerick, Carlow and Kerry all negative but experts say likelihood is case will occur here 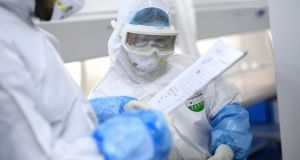 Laboratory technicians work on samples from people to be tested for the new coronavirus in Wuhan. Photograph: STR/AFP via Getty Images

There have been over 30 suspected cases of coronavirus in Ireland so far, with children among those tested, it has emerged.

The suspected cases were in Dublin, Cork, Limerick, Carlow and Kerry. And though all have tested negative, Irish public health experts have said they expect a case of the coronavirus to occur here.

Out-of-hours and oncall doctors have already been supplied with protective equipment, including masks and gowns, while supplies will reach regular GPs next week, according to the HSE.

“It’s not something we would be surprised by,” he said, adding that the strategy of the Department of Health and public health doctors was one of containment.

So far, there have been no confirmed cases of the new coronavirus in Ireland. Fifteen suspected cases have occurred but were shown to be negative on testing.

The virus, which originated in Wuhan in China in January, has led to more than 630 deaths. There have been more than 31,000 infections recorded, according to the latest figures.

Ireland does not have any plans at present to step up checks on incoming flights, Dr Holohan told journalists at a technical briefing on Friday, though there could be circumstances in which the passengers on a specific flight could be screened. Point of entry screening is regarded as inefficient, he pointed out.

Asked whether Ireland had any further plans to amend travel advice because of the virus, Dr Holohan said we were “in the hands” of the World Health Organisation (WHO), whose advice currently applies to people returning from mainland China only.

The UK, which on Thursday reported a third case involving a traveller who contracted the virus in Singapore, has expanded the list of countries to which its travel advice applies; Britain is free to do this after leaving the EU but Ireland follows the lead set by the European Centre for Disease Control.

Dr Holohan acknowledged the situation was “fast-moving” and advised people to “stay abreast” of the situation. A communications network has been set up with GPs to ensure they are informed of the latest advice, and the issuing of personal protective equipment to doctors’ surgeries has begun, officials said.

The WHO has warned the world is running out of masks and other equipment amid a surge in demand from efforts to curb the spread of the virus. Dr Holohan told RTÉ’s News at One that Ireland has “substantial supplies” at the moment, which are being distributed to GPs.

Asked what quarantine arrangements were in place for suspected cases, Dr Holohan said Ireland’s approach was based on people self-isolating while symptoms were being checked, rather than quarantine.

Head of the National Virus Reference Laboratory, Dr Cillian de Gacun, said the rising number of cases in China was “a concern” though the rate at which new cases were being reported in recent days had slowed.

While they were questions about the capacity of China to test all new cases, scientists would be hoping to see a plateau in the outbreak over the coming weeks, he said.