Hundreds of passengers have disembarked the coronavirus-hit Diamond Princess cruise ship in Yokohama, Japan after completing a two-week quarantine period and testing negative for the virus. Video: Reuters 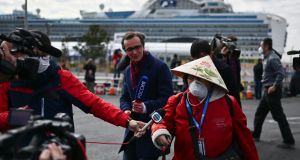 A passenger leaves on foot after dismembarking the Diamond Princess cruise ship in quarantine due to fears of the new Covid-19 coronavirus in Yokohama on Wednesday. Photograph: Charly Triballeau/AFP via Getty Images

Hundreds of quarantined passengers aboard a cruise ship docked in Yokohama walked on dry land on Wednesday for the first time in two weeks, amid growing controversy about Japan’s efforts to contain the coronavirus.

Two Irish citizens who were on board the quarantined Diamond Princess cruise ship have tested positive for the coronavirus.

The couple are being cared for at a military hospital in Tokyo having been transferred from the ship to the hospital on February 16th.

They were among six Irish citizens on board the ship.

About 500 passengers are expected to leave the Diamond Princess by the end of Wednesday after an ordeal in which over 540 of the 3,711 people on board were infected the potentially fatal disease – the largest cluster outside China.

Japan’s government says those released today have fulfilled local quarantine requirements after testing negative for the virus. The passengers walked through a scrum of reporters in Yokohama before boarding taxis and busses and retuning to their lives.

The liner was isolated earlier this month after a former passenger tested positive for Covid-19 in Hong Kong. Critics have described it as a floating incubator. Debate about the quarantine strategy has intensified since the release on Wednesday of a video by an infectious disease specialist who got on board.

Kentaro Iwata of Kobe University described the quarantine protocol on the liner as “completely chaotic,” with not a single virus specialist on board. Mr Iwata said he had 20 years of experience dealing with Ebola, Sars and other diseases but never feared infection until now.

“Inside the Diamond Princess I was so scared of getting Covid-19 because there was no way to tell where the virus is – no green zone, no red zone. There was no single professional control person inside the ship,” he said.

The Department of Health has stressed there have been no confirmed cases of Covid-19 in Ireland.

Minister for Foreign Affairs Simon Coveney confirmed on Tuesday that two Irish citizens who were passengers on Diamond Princess had tested positive for the virus and are receiving treatment in hospital in Japan.

“These citizens share dual citizenship with another EU member state and are not normally resident in Ireland,” Mr Coveney said in a statement on Tuesday.

Irish citizens who had been on board the Diamond Princess cruise ship, which is currently docked off Yokahama, included a married couple from Co Meath and a couple with dual Irish-German nationality.

“We are also in close contact with those who remain in quarantine on the ship. We are working with our EU partners and other like-minded countries regarding options for their return,” Mr Coveney said.

In Dublin, the National Public Health Emergency Team (NPHET) met on Tuesday to discuss plans for how health authorities would respond to any confirmed cases of Covid-19 in Ireland.

There have been 78 suspected cases of Covid-19 tested in Ireland to date, but no positive cases, health officials confirmed on Tuesday.

In a statement after the NPHET meeting, Dr Tony Holohan, Department of Health chief medical officer, said officials “are continuing to monitor the situation globally”.

“While the overwhelming majority of cases to date have been reported in China, we continue to advance preparedness plans here in Ireland,” he said.

“Hospitals have designated leads for Covid-19 preparedness, and isolation response requirements have been identified and are in place in order to deal appropriately with any suspected cases,” Dr Holohan said.

Two Irish citizens who were passengers on the Westerdam, a cruise ship which has had one confirmed case of Covid-19, which had docked off Cambodia, have returned to Ireland and entered self-imposed isolation for potential coronavirus.

Passengers were allowed to disembark from the ship, but an American citizen later tested positive for the virus, sparking concerns about potential exposure to the virus spreading in other countries from passengers returning home.

The death toll from the virus in mainland China rose by just under 100 on Tuesday to 1,868 people. There have been nine confirmed cases of the virus in the UK from nearly 5,000 people tested.