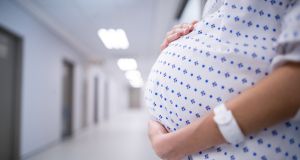 The Government has been urged to fully fund the national maternity strategy after a report showed only 11 per cent of the money originally promised has been provided.

Fifteen of the State’s 19 maternity units are operating in substandard physical environments, the report by the State’s health watchdog also found.

The Health Information and Quality Authority (Hiqa) said it was told by the HSE it would cost €75 million to fund the 10-year strategy, which was launched by Leo Varadkar in 2016. However, just € 8.5 million was provided in the first three years.

Róisín Molloy, whose newborn son Mark died in 2012 as a result of failings in Portlaoise hospital, said babies would continue to die unless a new government properly funds the strategy.

She pointed to a finding in the report that many maternity unit staff were not being trained in the use and interpretation of baby heart monitoring equipment. Where babies are injured at birth, an alleged failure to interpret this data is a “constant theme” in subsequent litigation, she pointed out, and was a major contributor to the rising cost of obstetric claims for the State.

Mr Varadkar, when Minister for Health, had promised ringfenced funding for the strategy, which never materialised, she said. Further, the HSE last year allocated just €1 million for it, instead of the €8 million required, “when it knew this report was saying the strategy had to be fully funded”.

The report states: “Hiqa believes that a comprehensive, time-bound and fully costed implementation plan for the strategy is vital to both the strategy’s success and safer maternity services between now and 2026.”

The National Women’s Council of Ireland called on all newly elected politicians to make fully funding the strategy a “red line issue” in programme for government negotiations.

Responding to the report, the Department of Health said “additional development funding” of €1.5 million has been allocated for the strategy in 2020, which will be used to further roll-out a new model of care. It said it would engage with the HSE to ensure a plan is developed to implement the recommendations.

Only the maternity units in Cork, Cavan, Drogheda and Wexford are found to be substantially compliant with standards on physical infrastructure, with the remaining 14 units - including the three big Dublin maternity hospitals - judged to be in need of significant upgrading and refurbishment, according to the report.

A low uptake by staff of training in specialist areas, and the lack of maternity networks within hospital groups, are identified as shortfalls that need to be addressed.

Two maternity units - University Hospital Kerry and St Luke’s, Kilkenny - are identified as having particularly high levels of non-compliance with standards. Among the problems identified are leadership and government issues, as well as arrangements around staffing, training and audit. Many of these issues were being addressed when Hiqa carried out follow-up audits.

Despite a long-standing promise that foetal ultrasounds would be provided at every maternity unit, these scans remained unavailable at five locations as the report was being compiled.

Up to 20 per cent of consultant posts in many medical specialties remain unfilled and many smaller maternity units are heavily reliant on junior doctors to provide 24/7 services, according to the report.

Overall, Hiqa reported high levels of compliance with its national standards. Most maternity units, for example, had arrangements in place to identify women at higher risk of complications and to transfer them as appropriate. And all units had emergency arrangements in place, with response teams available 24/7.