Dr Heimlich and how his simple manoeuvre can save your life

Michael Healy-Rae and Ronald Reagan are among those saved. Learn the technique and you’ll join Clint Eastwood and Olly Murs 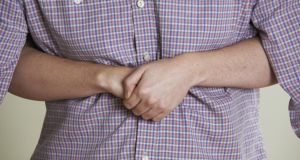 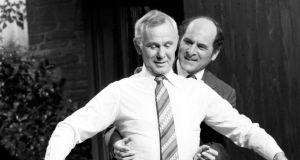 Michael Healy-Rae’s recent brush with death shows how a simple, easily learned medical intervention can save a life.

The Kerry TD joins Ronald Reagan, Goldie Hawn and Elizabeth Taylor in having had his life saved from choking by the Heimlich manoeuvre. Since it was introduced, in 1974, the arm thrust developed by Dr Henry Heimlich is credited with saving thousands of lives, the famous and not so famous. Last year even Dr Heimlich himself got to use it to remove the obstruction that was causing a fellow nursing-home resident to choke. Dr Heimlich, who died several months later, was 96 at the time.

Eileen Finnegan, an HSE staffer, has said Mr Healy-Rae was minutes from death as he choked on his chicken dinner at home in Kilgarvan. A neighbour of the Independent TD, she ran to the rescue and cleared his airway by administering the manoeuvre.

There are no official figures on the number of choking deaths in Ireland, but ambulance data and reports from coroners’ courts appear to show they are a regular occurrence.

National Ambulance Service paramedics were called out to choking incidents an average of 17 times a week, according to figures for 2010-14. Victims ranged widely in age, from babies and young children choking on small pieces of food to restaurant diners and the elderly residents of nursing homes.

Dr Ciarán MacLoughlin, the coroner for west Galway, who has presided over numerous inquests into choking deaths, has urged that anyone serving food to a member of the public should be trained in the Heimlich manoeuvre. On a single day in 2008 Mr MacLoughlin heard three inquests of people who had died by choking, two of them on the same day.

Yet while defibrillators are in place across the country to provide emergency treatment for heart-attack victims, it is doubtful as much attention has been paid to the treatment of choking incidents.

Which is a pity, because the Heimlich manoeuvre is easy to learn. Clint Eastwood, Olly Murs and many ordinary people have saved lives through their ability to administer it in emergencies.

How to do the Heimlich manoeuvre

Danny Curran, head of first-aid training at the Irish Red Cross, says abdominal thrusts are highly effective and easy to learn. He has used the technique three times to save a life, including that of one of his own children.

If somebody is choking, he says, you should first assess the situation. If the person can cough you should repeatedly slap their back. An inability to cough indicates that their airway is totally obstructed, and abdominal thrusts are needed.

To do this, stand behind the person, wrap your arms around the waist and then tip the person forward slightly. Make a fist with one hand and position it slightly above the person’s navel. Grasp the fist with your other hand. Press hard into the abdomen with a quick upward thrust, as if trying to lift the person up. Perform a total of five abdominal thrusts, if needed.

You can also perform the manoeuvre on yourself by bending over a hard surface, such as a chair, before shoving your fist inward and upward into your abdomen. The routine with a pregnant woman or an obese person is the same, except that you position your hands a little higher, at the base of the breastbone.

Children – except babies aged under one – can also be treated with the Heimlich manoeuvre. If an infant is choking, sit down and hold the infant face down on your forearm, which rests on your thigh. Thump the infant gently but firmly five times on the middle of the back, using the heel of your hand.