‘I put my hand on my left eye. I couldn’t see out of the other one’ 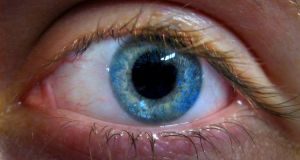 Agnes O’Connor says she waited several years to see a consultant and was told she would have to wait up to 20 months for a cataract operation: “I could be dead and buried by then.” Photograph: PA

It started, like so many age-related sight problems, with a blurring in the eye. “I was looking at telly one night and I put my hand on my left eye. To my horror, I couldn’t see anything out of the other one,” recalls 87-year-old Agnes O’Connor of Fairview, Dublin.

She got down to the Mater hospital quickly and was sent for an MRI – and then the reality of the public hospital system set in. After waiting months, she went for an appointment in February 2013 but, despite her evident sight problems, she was told to come back for a check-up in 12 months.

Three days after this appointment, she tried to read her post but was unable to do so.

Unable to reach the hospital by telephone, she took a taxi into the Mater and explained she had lost her sight overnight. Despite this, she was sent home and received an appointment for a date five months away.

“It was like a cattle market,” she said of the crowded public eye clinic. “You’d go in and all 12 of the benches would be full. Eventually, you’d get to do a sight examination: I called it ‘the cupboard’, a tiny space where they’d take two people at a time and you’d have to listen to the person behind you calling out the letters on the chart.”

“I’m not blaming the staff. They were doing three jobs at the one time, but it was disgusting.”

Ms O’Connor is a lively octogenarian who walks regularly to Mass and line-dances at the weekend but she says the sign at the clinic advising patients to come on their own if possible was “a bit much when you’re half-blind”.

She says she waited several years to see a consultant and was told she would then have to wait up to 20 months for a cataract operation. “I could be dead and buried by then.”

Then she realised she had private health insurance, taken out only a few years before. She went private and her cataract operation was performed within a fortnight. Dr David Keegan is currently treating her age-related macular degeneration. “Before I couldn’t see the traffic lights but now I can,” said Ms O’Connor, who can no longer read but still makes it to her club each week. “It’s a bit of a nuisance, but at least I’m not still waiting .”