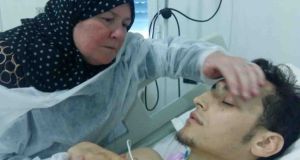 Abdu Raheem with his mother Patricia Fitzpatrick: Raheem was shot in both legs in Libya

Abduraheem Duibi, an English teacher in Libya, was in a car with work colleagues when it was fired upon by local militia on Saturday, March 4th.

Mr Duibi is an Irish citizen who grew up in Dublin but moved with his family to Tripoli five years ago.

After the driver was shot, Mr Duibi ran away but was shot in both legs. Mr Duibi bled profusely on the ground for about 30 minutes before being brought to a local hospital for treatment.

Libyan hospitals are bereft of drugs and treatment options due to the instability in the country so Mr Duibi’s family transported him the next day across the border to Tunisia.

Surgeons in the hospital in Tunis operated to remove the bullets but his condition grew septic. His family was forced to buy his antibiotics due to the shortage of supplies in the hospital.

I was shocked. If he were a German citizen, I’m sure their government would have acted

As his condition deteriorated, family and friends contacted the Department’s consular services in Tunis and Dublin to seek help in having him medically evacuated. Officials told them it did not have a fund to pay for an air ambulance.

“I talked to the consul in Tunisia, but she told me she could do nothing,” said his father, Libyan businessman Khairi Duibi. “I was shocked. If he were a German citizen, I’m sure their government would have acted.”

With the air ambulance service insisting on payment in advance, 18 days were to pass before Mr Duibi was successfully brought to Ireland

His mother, Patricia Fitzpatrick, said she was “gobsmacked” when the Department said it did not have a budget to help him get back to Ireland for treatment. “You don’t expect a thing like that to happen to your son. He was raised in Ireland, he worked in Dunnes Stores and paid taxes. We didn’t have the money. Is a child’s life not more important?”

As he was medically unfit to travel by normal flight, friends began a crowdfunding campaign online to raise the €22,000 cost of an air ambulance transport.

With the air ambulance service insisting on payment in advance, 18 days were to pass before Mr Duibi was successfully brought to Ireland. He landed in Shannon, where an ambulance brought him to University Hospital Galway.

“He was highly septic and about to die, and he had suffered an incredible amount of pain,” said renowned vascular surgeon, Prof Sherif Sultan. “You don’t see the terror of war very often in Galway but the amount of psychological trauma suffered by this man was unbelievable.”

The multidisciplinary medical team in Galway were forced to amputate Mr Duibi’s right foot to control the infection. Eventually, they succeeded in stabilising his condition and he is now recovering well.

Prof Sultan said the medical outcome would have been “completely different” if Mr Duibi had been medically evacuated from Tunis immediately. “He would still have both legs today if that had happened.”