Investigation into suicide of second patient at Connolly Hospital 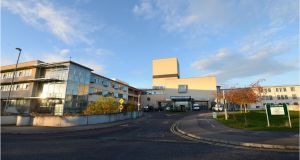 An investigation is under way into the death of a patient on the grounds of Connolly Hospital in Blanchardstown, Dublin. Photograph: Dara Mac Dónaill/The Irish Times

An investigation is under way into the death of a patient at Connolly Hospital in Blanchardstown, the second person to take their life at the hospital in the past month.

Last week, The Irish Times reported the suicide of a female patient who was found dead in a side-room of the emergency department of the hospital, where she had been placed pending discharge.

It has since emerged that a male patient took his life on the grounds of the hospital a week earlier, having been last seen in the waiting room of the emergency department.

The Garda Press Office confirmed the discovery of a body at the hospital early on the morning of Sunday, March 9th, following a search of the grounds.

It is understood that man had been arrested on public order offences a day earlier and was taken to Ashbourne Garda station.

While there, he required medical attention and was brought by ambulance to Connolly Hospital.

After being seen in triage, he was sent to the waiting room, but later left the building, according to a family member.

The hospital notified gardai of his departure and a lengthy search took place, which resulted in the discovery of the body.

A representative of Connolly hospital later contacted the family to express condolences, according to the family member, who called for a thorough investigation of the circumstances which led up to both deaths.

The RCSI Hospital Group, which includes Connolly, declined to comment about either case.

As with other hospital groups, the Government has yet to appoint a governing board to the group despite the fact that it is in existence almost three years.

Promises to underpin the functioning of hospital boards through the introduction of legislation have likewise not been met.