‘The expectation that you go back to work so soon is cruel and unfair,’ says parent of boy born at 23 weeks 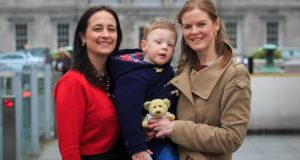 Tara Delamere’s son Patrick was born at 23 weeks and one day, right on the cusp of viability. By the time he came home from hospital, she had just eight out of the normal 26 weeks of maternity leave left.

“The expectation that you go back to work so soon is cruel and unfair,” says Delamere, who says she had no option but to take unpaid leave for 12 months until Patrick “healthy and happy”.

Green Party deputy leader Catherine Martin agrees: “How fair is it that someone like Tara has just eight weeks of maternity leave after months of hell,” she asks.

Her party has proposed a Dail motion to extend maternity leave for the mothers of preterm babies by the number of weeks a baby is born prematurely. Thus the mother of a baby born at 32 weeks would qualify for an addition eight weeks of maternity leave and benefit.

Ms Martin has called for cross-party support for the motion, which will be debated by the Dáil on Wednesday. “The current system puts enormous pressure on families of premature babies. We’re trying to help ease that pressure, to support families when they need it most.”

Ms Delamere says Patrick, her “tiny, featherless bird” when he was born in the National Maternity Hospital, weighed just 1lb and 4oz and had complex medical needs. While he needed several operations and she struggled with the trauma of such a premature birth, it was essential too that he develop an early, strong attachment to his parents.

She believes many other mothers in a similar position have no option under current rules but to go back to work early, or to take unpaid leave to mind their premature baby.

About 4,500 babies are born prematurely each year (less than 37 weeks’ gestation), equivalent to 6.6 per cent of all births. The Green says a Budget measure along the lines of their proposal could be implemented for €5.4 million a year.

Under current legislation, mothers are entitled 26 weeks of maternity leave and 16 weeks of unpaid leave. Maternity leave comes into effect on the day the child is born.

Ms Martin says the proposal offers Ireland a chance to be a leader internationally, though New Zealand last year implemented a similar proposal that extends parental benefit for premature births.