National Council for the Blind: waiting lists ‘out of control’ with 13,000 awaiting procedure 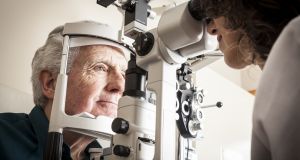 Of the 13,000 ophthalmology patients waiting for a procedure, 3,500 have been on the list for more than 12 months, according to official figures. Photograph: Istock

Thousands of eye patients are at risk of irreversible sight loss because of delays in accessing treatment, according to a leading charity.

Ophthalmology waiting lists are the longest of any specialty in the health service, with more than 13,000 people currently waiting for a procedure and almost 34,000 waiting for an outpatient appointment.

The National Council for the Blind of Ireland (NCBI) says unmanageable waiting lists are leaving patients at real risk of avoidable sight loss.

Proposals to deal with the backlog are contained in a review of primary eye care services, whose publication has been delayed by up to a year, according to the council.

The HSE says the review is “almost complete” and should be published in the coming months.

According to a spokesman, the review will provide a framework for reorganising services by maximising the capacity of primary care eye services delivered by teams of healthcare staff so that hospitals can be freed up to provide complex care for patients.

The long waiting times are particularly harsh on patients whose deteriorating eyesight cannot be reversed, according to medics.

David Keegan, consultant ophthalmic surgeon at the Mater Hospital, described the plight of patients with macular degeneration who are awaiting for treatment as a “hidden scandal”.

Whereas cataracts can be removed, macular degeneration is irreversible, he said. Dr Keegan said many patients are being forced to wait for 12 weeks to receive a simple injection that effectively treats the wet form of macular degeneration; during this period, the likelihood of the patient retaining vision drops from 90 per cent to 40 per cent.

Chris White, chief executive of the NCBI said ophthalmology waiting lists are “out of control”.

“This is even more shocking when you consider that as much as 75 per cent of sight loss is avoidable.

“We have a hidden scandal on our hands but we also have a solution, if the Government acts now,” said Dr Keegan. “Vital, sight-saving treatments are available for patients with AMD and other retinal conditions, such as diabetes-related eye disease.”