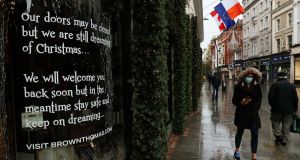 Irish people living abroad should not plan to travel home for Christmas due to the risk of importing Covid-19, chief medical officer Dr Tony Holohan has advised.

Christmas visits home will be regarded as non-essential travel and are not recommended, he said.

Tánaiste Leo Varadkar had earlier on Thursday advised people intending to come home from abroad for Christmas not to book flights “at the moment” due to the uncertainty from the pandemic.

However, Dr Holohan went further, bluntly ruling out such Christmas travel even on compassionate grounds.

“Travel that would normally happen at Christmas would have to be regarded as non-essential this Christmas,” he told a briefing by the National Public Health Emergency Team (Nphet) on Thursday evening.

Expressing concern about high rates of the virus in most European countries, he said the reimportation of cases through foreign travel was one of the most significant risks the State faced.

“People potentially coming back for the Christmas period are experiencing a much higher level of infection. That will be one of the most significant risks for us if we make the progress we hope to make.”

‘Things will be different’

He also warned that “things are going to be different this Christmas” and it was “too early” for people to be making plans for the festive season.

Large-scale social events involving alcohol and other activities that would happen in a “normal” Christmas, such as office parties and large family get-togethers, “are not going to be possible”, he warned.

With case numbers dropping by half in the past fortnight, the State has the fastest declining incidence of Covid-19 in Europe.

Halfway through the current six-week period of Level 5 coronavirus restrictions, officials said all indicators were positive but added that “we’re only halfway down the curve”.

Nphet will meet on November 26th to decide what measures it will recommend to the Government to put in place from December, when some restrictions are likely to be eased.

One further death from Covid-19 and 395 new cases were reported on Thursday evening.

Some 161 hospital staff in Limerick, 77 in Naas and 55 in Letterkenny are out of work due to infection or being contacts of positive cases, forcing the closure of wards and the postponement of elective work.

Health bosses considered closing Naas General Hospital, where only critical care services are being provided, but decided not to because of the knock-on effect on other hospitals, it is understood.

The outbreaks in the hospitals “haven’t completely stabilised”, Dr Vida Hamilton, HSE hospitals group lead, said, but they were being managed appropriately.

The Northern Executive on Thursday agreed to a one-week extension of current Covid-19 restrictions, following days of bitter division amongst Ministers. Cafes, hairdressers and beauty parlours will be able to reopen in the North from November 20th.

Asked whether he would advise against cross-Border travel given the higher Covid-19 incidence in Northern Ireland and the planned easing of restrictions there from next week, Dr Holohan pointed out that a 5km travel limit was in force in the State “whether you’re close to the Border or hundreds of miles from it”.

He said his colleagues in the North were making “great progress” in reducing infections and he hoped the decision by the Northern Executive would “underscore” this improvement.