Northern Executive agrees to extend Covid-19 restrictions for a week 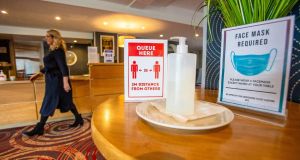 Hand sanitiser in the reception area at the White Horse Hotel on the outskirts of Derry on November 5th. Photograph: Paul Faith/Bloomberg

The Northern Executive has agreed to a one-week extension of Covid-19 restrictions, following days of bitter division among ministers over whether to allow the hospitality industry to reopen.

Hairdressers, beauty parlours and driving instructors will be able to go back to work on November 20th, but by appointment only. Cafes will be allowed to open until 8pm from the same day, but alcohol sales are banned.

Pubs, bars and hotels will be permitted to sell sealed off-sales from November 20th and reopen fully a week later – even though licensed premises south of the Border will stay closed.

The Stormont ministerial briefing paper, seen by The Irish Times, includes pledges of extra help for hospitality businesses, though Stormont departments are also to do more to ensure that businesses comply with the changed rules.

The DUP, Alliance and the Ulster Unionist Party voted for the one-week extension of restrictions, followed by a relaxation of the rules, but the SDLP abstained and Sinn Féin voted against.

Minister for Health Robin Swann, of the Ulster Unionist Party, said it was “no secret” that he had wanted a different outcome, but backed the proposal in an attempt to avoid all Covid-19 restrictions lapsing first thing on Saturday.

Condemning the outcome, Sinn Féin vice-president Michelle O’Neill said the Executive had been clearly told by the North’s chief medical officer, Dr Michael McBride, that a further fortnight of restrictions was needed to prevent deaths.

“I, in all good conscience, could not support a proposal that falls short of that,” said Ms O’Neill. “I am appalled at the actions of the DUP this week, to use a cross-community vote when they did not get their own way.”

Dr Tom Black, chairman of the British Medical Association in Northern Ireland, expressed concern over the easing of restrictions, saying that “our health service is under the most pressure it has ever been and I am not sure these measures will address that”.

He was also cautious over the possibility of a December start date for Covid-19 vaccinations, describing it as “exceptionally optimistic”.

The agreement, which came after four days of meetings and rancour, built on an earlier proposal from Minister for Justice and Alliance Party leader Naomi Long, who recommended setting a definite restart date for hospitality businesses.

Explaining the SDLP’s abstention, leader Colum Eastwood said his party could not in good conscience support measures that fell short of protecting against “plunging us into more restrictions just before Christmas – even two weeks would have risked that”.

The North on Thursday added 15 more to its Covid-19 death toll, which now stands at 825, along with 548 more positive cases. Seven of 12 of Northern Ireland’s hospitals now have no free beds. There are currently 435 Covid-19 patients in hospital, 46 of them in intensive care.

Defending her party’s actions, DUP Minister for the Economy Diane Dodds said the Executive had to “bring certainty to people in their lives in the run-up to Christmas” and had agreed a “balanced and proportionate” decision.

Colin Neill, chief executive of Hospitality Ulster, welcomed the fact a decision had been reached.

“This brings to a conclusion a period of uncertainty and will hopefully result in thousands of jobs and businesses being saved,” he said.