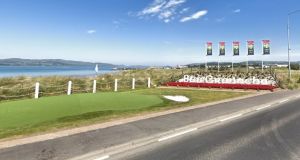 Buncrana in Co Donegal continues to have the highest 14-day incidence rate of Covid-19 in the State, running at almost four times the national average. Image: Google Streetview.

Buncrana in Co Donegal continues to have the highest 14-day incidence rate of Covid-19 in the State, running at almost four times the national average.

The latest data from the Health Protection Surveillance Centre (HPSC) for the two weeks from October 27th to November 9th examines the number of people infected per 100,000 of population by area, giving a better understanding of the rate of transmission than straight case numbers.

The national rate has been decreasing gradually since the move to tighter restrictions and stood at 135 as of Thursday, down from a peak of 310.

Speaking on Thursday, chief medical officer Dr Tony Holohan highlighted Donegal as he said not every part of the State has experienced the same reduction in cases since the latest lockdown began.

Four electoral areas - Lismore in Co Waterford, Ballinamore and Manorhamilton in Co Leitrim and Corca Dhuibhne in Co Kerry - each recorded fewer than five cases of Covid-19, resulting in a 14-day incidence rate of 0.

Electoral areas that recorded some of the lowest 14-day incidence rates included Rosslare in Co Wexford (32.5), Carrickmacross-Castleblayney in Co Monaghan (32.7) and Baltinglass in Co Wicklow (34.4).

The data is recorded according to local electoral areas of which there are 31 in Dublin and a total of 166 nationally.

Search the table with this story to see how your area is coping with Covid-19. If you are reading this on The Irish Times app and can’t see the searchable table, go here.