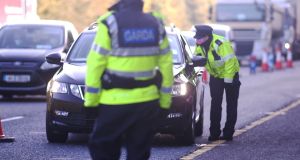 The Policing Authority has questioned the logic of introducing fines for breaches of Covid-19 legislation, citing fears they could reduce compliance with regulations.

In its latest report evaluating the response by the Garda to the pandemic, the Authority noted “the generally comprehensive, and very welcome, observance of the Level 5 restrictions” which include a 5km movement restriction for non-essential travel and a ban on gatherings.

When Level 5 restrictions were introduced three weeks ago, the Government said a graduated system of fixed charge penalty notices would be introduced to help gardaí enforce them.

These fines would range from about €60 for failing to wear a facemask in designated areas up to €1,000 for organising a house party, with greater fines for repeat offences.

Level 5 restrictions are due to be lifted at the start of December providing the spread of Covid-19 has dropped sufficiently in the community.

In light of the current high rates of compliance with the rules, the Policing Authority said the introduction of a fines system half way through Level 5 may appear “inconsistent”.

“Could there be a risk that their introduction at this point might serve to reduce the level of compliance by some? It also seems to be the case that there has been a definite reduction in the types of activities and behaviours that prompted the provision for such penalties in the first instance.”

The authority noted that the proposed fines system would have not have an “in-built check” in the form of oversight by the Director of Public Prosecutions (DPP), unlike the other emergency powers granted to gardaí at the start of the pandemic in March.

It said based on its engagement with Garda Commissioner Drew Harris, there is still some work to do to implement a fines system “and it may be some time before a Garda member is able to issue a fine for a breach in restrictions”.

The authority said there may be “significant value” in reconsidering the introduction of such a system so close to the projected end of Level 5.

Minister for Health Stephen Donnelly was expected to bring in the fines system last week but this did not occur. The Department of Health said work is ongoing and the fines system remains an “urgent priority”.

Work within the Garda on the infrastructure for the fines system has been ongoing but it must wait for an official order from the Minister.

Since the end of June, gardaí have taken enforcement actions against eight people for failing to wearing face coverings and five people for breaching international travel restrictions.

There have been 11 incidents of alleged breaches of regulations by retailers and 37 incidents relating to other breaches such as organising events.

The number of spitting or coughing attacks against gardaí also climbed in October, to 28 incidents, the first increase since May. Gardaí used spit-hoods on suspects on six occasions during the same period.