Covid-19: Nphet advises against travel from abroad as 395 cases and one death recorded 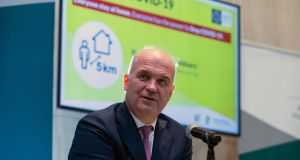 People should not travel home to Ireland for Christmas due to the threat posed by Covid-19, chief medical officer Dr Tony Holohan has advised. Photograph: Colin Keegan/Collins.

People should not travel home to Ireland for Christmas due to the threat posed by Covid-19, chief medical officer Dr Tony Holohan has advised.

“Travel that would normally happen at Christmas would have to be regarded as non-essential this Christmas,” he told reporters at a National Public Health Emergency Team (Nphet) briefing on Thursday evening.

Nphet reported a further 395 cases of Covid-19 and one related death on Thursday. A total of 1,965 deaths from the disease have been recorded in the State since the pandemic began and a total of 66,632 cases have been confirmed.

Around one third (132) of the latest cases were in Dublin with 31 in Cork, 27 in Donegal, 27 in Limerick and 27 in Galway, with the remaining cases spread across 18 counties. The median age of those infected was 35 years.

The department said that of 2pm on Thursday a total of 279 Covid-19 patients were in hospitalis across the State, with 39 people in intensive care.

Dr Holohan said he was concerned about the picture in the rest of Europe, due to high and rising rates of Covid-19 in many countries.

Many of the countries affected were ones the Ireland has a close travel relationship with, he said, and the importation of cases was one of the most significant risks the State faces, he said.

“People potentially coming back for the Christmas period are experiencing a much higher level of infection. That will be one of most significant risks for us if we make the progress we hope to make,” Dr Holohan added.

Ireland now has the second lowest incidence of the virus in Europe, behind Finland, according to deputy chief medical officer Dr Desmond Hickey.

With case numbers declining in only four European countries over the past two weeks, Ireland has recorded the biggest drop in incidence, at 53 per cent.

Tánaiste Leo Varadkar earlier advised Irish people intending to come home from abroad for Christmas not to book their flights at the moment due uncertainty related to the pandemic.

Ireland is half way through a six-week Level 5 lockdown, which is due to end on December 1st. The Government may then ask the public to limit their close contacts to family only over the Christmas period.

Mr Varadkar said in the Dáil: “I know that’s difficult. I know that’s tough but Christmas is six weeks away and it’s too soon for people to be booking flights to come home.”

Asked about internal travel at Christmas, he said Nphet would give formal consideration to its future recommendations in two weeks’ time, shortly before the current Level 5 measures are due to end.

However, he warned that large-scale social events involving alcohol, office parties and large family get-togethers “are not going to be possible”.

He said the challenge from the virus would be with us through the Christmas period and the best way to counter it was by complying with public health advice.

A 5km travel limit is currently in place, he pointed out, as well as restrictions confining activity outside the home. If this is to change, “the situation has to improve from where it is, and we’re hopeful it will improve”.

“But there’s no head-room, no wriggle-room, so the next three weeks (of Level 5 restrictions) will have to be same as the last three weeks if we’re going to be where we need to be.”

Prof Nolan said there have been significant continued improvements in the main trends over the past week. Daily case numbers have fallen to 400 from a peak of 1,200 but this was only “halfway down the curve”.

With an average of 20 hospital admissions a day, “we’re not out of the woods”, he added. He said he remained concerned about the number of cases among older people and said the incidence of the disease remains “persistently high” in Donegal.

However, Dublin, where the decline in cases had been slower, was now falling at the same rate as the rest of the country apart from Donegal.

Prof Nolan warned that in some parts of the country restrictions on mobility might have to be kept in place longer in order to bring the disease under control.

Northern Ireland’s Department of Health earlier said a further 15 people had died and 548 positive tests were recorded in the previous 24 hours. Stormont’s parties on Thursday evening came to a compromise to extended the current curbs for a further week.

For now, those planning to return to the State for Christmas face having to pay up to €200 for a private Covid-19 test if they want to reduce their quarantine period.

The Cabinet has agreed that arrivals from countries with a “red” rating in the EU-wide traffic light system from midnight on November 29th will not have to restrict their movements for the full 14 days if they produce a negative PCR test at least five days after their arrival.

Travellers from “orange” regions will be allowed come into Ireland without restricting their movements as long as they have proof of a negative PCR test that was done no longer than three days before their arrival.

Under the EU traffic light system, the map of green, orange, red and grey regions will be updated every Thursday based on EU epidemiological data and the changes will be applied in Ireland the following Monday.

A country or region will be coloured grey if there is insufficient data on testing and incidence rates can be found.