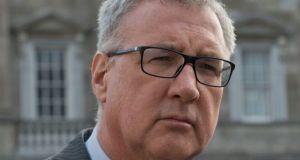 Prof John Crown, consultant oncologist at St Vincent’s University Hospital Dublin, said: ‘The last thing patients need to hear is that we’d like to get you this scan, but we can’t do it for a month.’ File photograph: Brenda Fitzsimons

Almost 150,000 fewer people have attended Ireland’s main cancer screening services in the first half of the year due to a reduction in non-Covid related care, the Irish Hospital Consultants Association (ICHA) has claimed.

It has raised several areas of concern, not all related to the pandemic, regarding a lack of sufficient care for oncology patients and historic underinvestment in essential services.

Professor John Crown, consultant oncologist at St Vincent’s University Hospital Dublin, warned that the system is now “at risk of being in real trouble” due to shortfalls in timely access to consultant appointments, scans and equipment required to monitor cancer treatment.

“The last thing patients need to hear is that we’d like to get you this scan, but we can’t do it for a month,” Prof Crown said in a video released on Friday as part of the IHCA’s campaign #CareCantWait.

The Association says 12,400 more people are currently awaiting an inpatient or day case gastrointestinal endoscopy since last year. Of the more than 2,400 people on the urgent cancer wait list for endoscopy services, almost a quarter of have been waiting more than three months.

In order to tackle the problem, the IHCA is calling for the recruitment of 73 more consultant oncologists over the next eight years.

“There is a lot of apprehension as to what it will be like to be a patient or a healthcare worker in the hospital system in Ireland over the next six months,” Prof Crown said.

He explained that much of the problem relates to the length of waiting lists, citing one case of a female patient facing a waiting time in excess of three years to see a pain specialist.

“And this is considered remotely normal,” he said.

The IHCA campaign focuses on cancer treatment. It looked at the new data on cancer screening programmes which have been affected by Covid-19 and its impact on health services. Between BowelScreen, CervicalCheck and BreastCheck, it said, more than 248,000 people were screened between January and June last year compared with just over 99,000 in the first six months of this year.

But it noted that even before the pandemic took hold, according to HSE data, by the end of 2019 services were missing targets for cancer referrals and admissions.

It said last year’s target standard for new patients attending rapid access breast, lung and prostate cancer clinics within a recommended timeframe was 95 per cent but that just under 72 per cent of patients met that target.

Early attendance at Rapid Access Clinics for lung cancer was 9 per cent below target, and access to radiotherapy within 15 working days was 6 per cent below, it said.

Prof Crown said a “lack of resilience and insufficient resourcing” in oncology will lead to severe challenges in the reopening of cancer services.

The HSE could not immediately respond to the points raised by the IHCA.