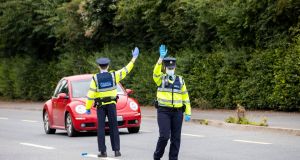 A Garda checkpoint on the main road into Naas, Co Kildare, where new measures to control the spread of Covid-19 have been introduced. Photograph: Tom Honan

More than 300 cases of Covid-19 were recorded in Co Kildare in the past fortnight, almost twice as many as any other county.

The Department of Health has released figures showing the county-by-county incidence of the disease across the State for the first time.

Nine counties – Kerry, Kilkenny, Leitrim, Longford, Monaghan, Roscommon, Sligo, Tipperary and Waterford – currently have minimal spread of the disease, according to the data supplied on request to The Irish Times.

In contrast, the 14-day incidence of Covid-19 in Co Kildare stands at 138.4 cases per 100,000 of population, almost eight times the national average.

Movement restrictions have been imposed in Co Kildare to try to control the spread of the disease, with significant clusters recorded at three meat factories.

The other two counties on which regional restrictions were imposed last Friday, Offaly and Laois, have 14-day incidences of 109 and 83.8 respectively.

The lowest figure provided is for Co Galway, which has eight new cases and an incidence rate of 3.1.

The number of new cases is not provided for nine counties that recorded fewer than five case over the two-week period in order to protect patient confidentiality. This means their incidence, which is low, cannot be calculated.

In total, 833 new cases of the disease were recorded between July 26th and midnight on August 8th, giving a national incidence of 17.5. This is almost eight times higher than figures recorded in June.

Fourteen-day incidence figures are not currently published, though daily epidemiological reports do provide information on the cumulative incidence of the disease in counties. The National Public Health Emergency Team (NPHET) has said it plans to publish daily localised incidence figures soon.