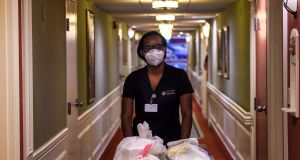 The United States added 59,202 new cases, a 1.2 per cent rise equal to the average of the past seven days. In the United Kingdom the Department of Health announced on Friday that households in Preston would be banned from mixing indoors or in gardens.

Chief executive of Preston city council Adrian Phillips told BBC Radio 4’s Today programme on Saturday that the local health director had been targeting young people in particular with the stark message: “don’t kill granny”. He said: “The community spread we are seeing we believe in many cases are young people taking it home and catching the virus.”

Just 10 enforcement orders have been issued to people for breaking quarantine rules after arriving in the UK, it has emerged, as fears of an extension of the measures to other parts of Europe led to a surge in last-minute inquires from people desperate to get away before any further crackdown.

Meanwhile, the pandemic showed some signs of easing in Iran, one of earliest epicentres.

In India, which now has one of the fastest-growing epidemics in the world, emerging rural hot spots with fragile healthcare infrastructure and difficult living conditions are posing a challenge to the government of prime minister Narendra Modi.

Chinese biotech company CanSino Biologics said it may test its coronavirus vaccine on pregnant women to study its ability to protect groups most vulnerable to Covid-19.

“If Democrats continue to hold this critical relief hostage, I will act under my authority as president to get the American people the relief they need,” said Mr Trump on Friday.

Children with Covid-19 are being hospitalised more frequently, and about one-third of those hospitalised in a subset of a US Centers for Disease Control and Prevention study needed intensive care.

The CDC analysed data for 576 pediatric hospitalisation cases in 14 states, finding that about eight children are hospitalised for every 100,000 infected, compared with more than 164 adults per 100,000.

Hospitalisation rates of children increased steadily between March and July, with higher rates among Black and Latino children than others, according to the study.

The CDC analysed data for 576 pediatric hospitalisation cases in 14 states, finding that about eight children are hospitalised for every 100,000 infected, compared with more than 164 adults per 100,000.

Vietnam has reported 21 new infections, of which 20 cases are tied to the coastal city of Danang and one imported, according to the health ministry. The nation has confirmed 353 infections tied to the Danang July 25 outbreak, and has a total of 810 cases with 10 deaths.

China added 31 confirmed virus cases on August 7th, including six that were imported. All the local infections are in Xinjiang, according to the National Health Commission.

Tianjin-based CanSino Biologics said it may test its coronavirus vaccine on pregnant women to study its ability to protect groups most vulnerable to Covid-19. The Chinese company, which was the first in the world to start human testing of vaccines against the virus in March, “may include pregnant women and look at the shot’s ability to protect” young people in future trials, founder Yu Xuefeng said at a webinar hosted by Hillhouse Capital on Saturday.

The epidemic in India is now one of the world’s fastest growing, after passing the milestone of two million cases. Experts are worried infections will now rise exponentially in the world’s second-most populous country, especially in its under-prepared rural hinterland.

Belgium's authorities said on Saturday that 768 more people have been infected with coronavirus in the past 24 hours, versus 858 the day before. Five more deaths were reported, bringing the total number of fatalities to 9,866.

Denmark is unlikely to go ahead with a planned reopening of nightclubs after the number of daily virus cases jumped, said prime minister Mette Frederiksen. Danes may also have to get used to wearing face masks more often. At the moment, the face coverings are only encouraged during rush hour in public transport.

Starting Saturday, Germany will implement mandatory tests for travellers returning from high-risk destinations. Germany’s reproduction factor – or R value – rose to 1.16 on Friday, the highest in 10 days, meaning 100 infected people are estimated to spread the disease to about 116 others.

The Philippines is ready for a “protracted” fight against the pandemic and its effects on the economy, which shrank by a record in the second quarter, said finance secretary Carlos Dominguez. The Asian country is in recession after its economy shrank 16.5 per cent in the second quarter. Rising infections pushed the government earlier this week to reinstate restrictions in the capital region and four neighbouring provinces for two weeks.

Australia’s Victoria state reported 466 new cases of Covid-19 and 12 deaths, taking the cumulative number of infections to 14,283, with 7,808 of them active, said Victoria premier Daniel Andrews on Saturday. New South Wales, Australia's largest state, had nine new cases in the 24 hours to 8pm on Friday.

While Australia enjoyed early success in flattening the curve of infections, Victoria is at the centre of a renewed outbreak and is experiencing some of the strictest social-distancing measures in the western world. - Guardian/Bloomberg