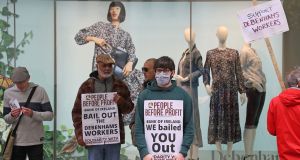 Former Debenhams staff protesting outside its store on Dublin’s Henry Street in June: the company was one of the high-profile retailers to put their Irish arms into liquidation. Photograph: Nick Bradshaw

The level of corporate insolvencies in Ireland may peak next year at levels last seen at the end of the financial crisis as the real cost of the Covid-19 economic shock on businesses becomes apparent, according to a leading insolvency expert.

“In the short-term my prediction is that insolvency numbers will return in 2021 to the worst numbers of the last recession,” said Neil Hughes, insolvency practitioner and managing partner of Baker Tilly Chartered Accountants in Ireland. “However, I expect them to drop back down sharply again in 2022.”

Corporate insolvencies reached a crisis-era high of 1,684 in 2012, the year in which the Republic was the subject of an international bailout following the collapse of the property market. At the time the government was also in the middle of a €30 billion austerity drive that would last over six years to the end of 2014.

The level of companies imploding has fallen every year since then, to 568 insolvencies in 2019, according to Deloitte Ireland.

Covid-19 restrictions served as a catalyst for some high-profile business collapses in the second quarter of the year, with department store chain Debenhams Ireland, the Irish arms of fashion outlets Oasis and Warehouse, and the Usit travel group among local names succumbing to liquidation.

However, insolvencies fell 12 per cent in the first half of this year to 273, Deloitte said last month, as firms, particularly in the retail and hospitality sectors, were supported by government salary support schemes and the freezing of certain fixed costs even as the economy went into lockdown in March.

Yet analysts expect that the level of companies going under will start to creep up in the second half of this year despite the cushioning effect from the Government’s €7.4 billion stimulus plan, which was unveiled last month. Insolvencies are expected to peak in 2021 even if the wider economy is in recovery mode, they said.

One of the elements of the stimulus package – an improved grant to help businesses to reopen following Covid-19 restrictions in recent months – opens for applications on Monday. The so-called Restart Grant Plus scheme offers grants of between €4,000 and €25,000 to businesses, compared to €2,000 to €10,000 previously.

Funding committed to the scheme has more than doubled to €550 million, while the list of business types that can apply for grants – through local authorities – has also been widened.

“Hairdressers, sports clubs, cafes, restaurants and several other businesses can use this money to help with the costs associated with reopening and adapting to what is a very different environment,” said Tánaiste and Minister for Enterprise, Trade and Employment Leo Varadkar.

Meanwhile, banks are working on plans to offer loans at below-market rates to small- to medium-sized businesses (SMEs) as soon as late August, backed by a €2 billion Government scheme that guarantees up to 80 per cent of the money extended to eligible companies.

AIB and Bank of Ireland, the main lenders to SMEs and larger corporations, revealed last week in their financial results for the first half of 2020 that they have set aside large provisions against their books amid the Covid-19 crisis in anticipation of a spike in bad debts.

Bank of Ireland held €220 million of provisions against non-property SME and corporate loans that had become riskier but were not in default at the end of June, up from €78 million in December.

AIB had ringfenced €388 million of provisions against risky – but still performing – loans issued by its corporate, institutional and business banking division, which excludes Irish SMEs, in June, up from €23 million at the end of last year.

1 In this strangest of recessions, what happens next for Ireland?
2 Chris Johns: Boohoo exposed on pay and conditions in digital economy
3 Hotel bookings collapse in wake of additional Covid restrictions
4 FBD changes wording of business insurance policies amid fight over virus payouts
5 Should I switch bank now with Ulster Bank at risk of closing?
6 Michael O’Leary is the boss you want to lead an airline out of crisis
7 Air travel never going ‘back to way it was’
8 Estée Lauder staff at Dublin airport plan further strike action
9 ‘It’s a matter of fairness’: squeezing more tax from multinationals
10 EY Entrepreneur of the Year: nominee profiles
Real news has value SUBSCRIBE