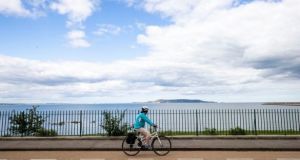 Plans to restrict Strand Road in Sandymount to one-way traffic were branded “brave”, “fantastic” and “disastrous” by those enjoying the sunshine on the south Dublin coast this weekend, with some holding all three opinions at once.

Dublin City Council intends to turn half of the road into a two-way cycle track with traffic reduced to one lane from Sean Moore Road to the Merrion Gates.

The radical plan, the latest in a series of measures to requisition roadspace from cars for cyclists, found favour with many dodging the heavy traffic to get to the seaside on Saturday.

“I would be in favour of it, as long as it is done in a thoughtful manner,” Sandymount resident Penny Kyle said. “My only concern would be that the smaller residential roads would become rat runs, but if they can manage to develop it in such a way that that wouldn’t happen, I think it could be fantastic.”

Vivienne Ahern, who had travelled to Sandymount from Rathfarnham, thought the idea of a fully segregated cycle lane could work well on Strand Road.

“Where we live cyclepaths have been put in which are just painted down have of a road lane, so there is not enough physical space for cyclists and cars. This is a much better idea. Where there is proper separation so the cyclists are not going to get mixed in with the traffic.”

One man who lives on Strand Road described himself as “cautiously positive” about the proposals.

“I would be happy provided it is implemented in a sensible way. We live in a cottage there, and I would be worried they might take away our parking outside the house. We have two small kids and the parking is a great barrier between us and the traffic.”

However, he would like to see changes to the road. “Trucks speed along here every day so overall I would be cautiously positive about something that would reduce that. But I do feel funny about it being pushed through as a Covid-19 emergency measure, it doesn’t seem appropriate.”

Geraldine O’Flaherty, who lives on Park Avenue in Sandymount is less ambivalent about the proposal.

“It’s ridiculous!” she said. “I would be very concerned about the effect this could have on Park Avenue. If Strand Road is made one way, Park Avenue will be the only other option for people apart from the Merrion Road, which is already choked with traffic. There will be a surge of traffic onto Park Avenue, it will be absolute mayhem.”

She also questioned whether there would be much call for a cyclepath after the summer. “I can’t see that many people using it in the winter, particularly women, are they going to want to turn up in the office with their hair and clothes ruined?”

Jamie Kennedy and Dermot Hughes, members of the Blackrock Athletics Club, who were running to the Phoenix Park and back to train for marathons that are no longer happening, had many and varied views on the wisdom of the proposals.

“I think it’s a good idea, a great idea, I think they should do it, but it’s going to be disastrous,” Mr Kennedy said. The just-over-2.5km journey from the Merrion Gates to Sean Moore Road already takes 40 minutes, he said.

“In the long run what they should do is have a board walk on the other side of the sea wall and put the cycle path there.”

Mr Hughes said the one-way system recently introduced in Blackrock had transformed the village. “Blackrock was soulless, it never had the atmosphere of Dalkey or Ranelagh, but the one-way system, while the lay out needs some adjustment has been a radical improvement. This [Strand Road] needs a radical plan as well, and by God is this radical!”

Mr Hughes was sceptical that the cyclepath was a temporary measure. “They’re saying it’s temporary? That’s the greatest load of bulls**t! I say give it a lash for three months, and remove it if it’s not working, and don’t be bulls**tting us.”

Mr Kennedy said he was in favour of the plan in principle. “It’s a brave plan, it’s a good idea, but it’s not going to work.”