Donohoe does not commit to specific compensation for pubs 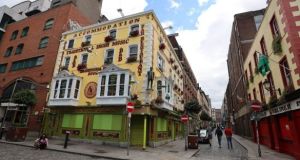 Closed pubs in Dublin’s Temple Bar. Publicans had hoped they would be able to reopen on August 10th. Photograph: Collins

Minister for Finance Paschal Donohoe has not committed to any specific compensation package for publicans who will have to keep their pubs closed for at least another three weeks.

Mr Donohoe said on Wednesday afternoon he would look at support for particular parts of the country and the economy that were affected by Covid-19 and Tuesday’s Cabinet decision, but did not refer specifically to pubs.

He was speaking after the announcement of the Government’s latest exchequer figures. His comments which did not mention a specific plan or compensation for public houses will bring little comfort to vintners who have said the second delay to their reopening plans has led to a “full-blown crisis” in the industry.

“My first priority is to implement the July jobs plan and that has many measures that will help,” said Mr Donohoe when asked.

“I am going to be engaging with (Minister for Public Expenditure) Michael McGrath and Minister for Media, Arts and Culture, and the Gaeltacht) Catherine Martin on the consequences (of Tuesday’s Cabinet decision).

He said he would be working with Mr McGrath and Ms Martin on “further measures that will be needed for some parts our our country and other parts of our economy”.

He said many of measures in the July stimulus plan could have a “really positive affect on a really difficult problem”.

He added: “Work is underway to what else may need to be done.” Following the Cabinet meeting on Tuesday, Taoiseach Micheál Martin and other senior Ministers indicated at a briefing that the Minister and others would be looking at solution to address the challenges facing pubs.

Asked about the decision on RTE Radio’s Drivetime, Mr Donohoe said the Cabinet had looked at doing things geographically by county or by region. “We’re a very small country with high levels of mobility within it,” meaning options open to larger countries aren’t open to Ireland, he said.

Earlier public health expert Dr Gabriel Scally said that alcohol is the “best friend” of the coronavirus and the only safe option was to keep those pubs not serving food closed.

Dr Scally drew a clear distinction between pubs that only serve alcohol and those that also serve food.

“They are like chalk and cheese. I’ve never had to shoulder my way to the counter to get a drink in a restaurant.”

Speaking on RTÉ Radio One’s Today with Sarah McInerney Show, Dr Scally pointed to Scotland where pubs had reopened and 32 people were infected with Covid-19 having all been in one pub.

He said keeping the virus under control was not good enough, and said the aim should be to have zero cases. Keeping the pubs closed was the way to do that.

A “zero Covid” strategy would require co-operation North and South, no domestic cases, and putting controls in place to ensure no cases were imported, he said.

When asked about Scottish First Minister Nicola Sturgeon’s proposed Four Nations Elimination Strategy, Dr Scally said he admired her and the plan but said he was pessimistic about the response from Whitehall.

Dr Scally was speaking following a Cabinet decision on Tuesday evening to delay the already-paused phase four of reopening society for a further three weeks.

Pubs which do not serve food and nightclubs will remain closed until September at least, and the current strict limits of 50 on numbers congregating indoors, and 200 outdoors, will remain in place.

Face masks are set to become mandatory in all shops and retail centres from Monday, and pubs serving food and restaurants will be required to close at 11pm.

Separately, the Cabinet also decided to remove five states or territories from the “green list” of 15 from which passengers arriving into Ireland would not need to quarantine. They are Malta, Cyprus, San Marino, Gibraltar and Monaco.

Earlier, Minister for Health Stephen Donnelly said while he was disappointed the restrictions were not being eased the decisions were made with the safety of citizens in mind.

Mr Donnelly said the Government had to take a cautious approach to lifting coronavirus restrictions and said keeping people safe, opening schools and restarting the economy was the priority.

He said the Government would look closely at the possibility of having regional or county decisions in the future. The concern, the Minister told Morning Ireland, was that things were finely balanced and could get out of control.

Ireland is in a dynamic situation and the Government must respond dynamically, said Mr Donnelly.

Meanwhile Independent TD Michael Healy-Rae said the Government was treating publicans and their customers with contempt and he claimed reopening pubs would protect the public’s health.

The dangers that might arise in bigger pubs could not be compared with smaller rural pubs where there might be just six or seven customers, he said.

The decision to retrench the current phase of lockdown came after a further 45 confirmed cases was confirmed by the National Public Health Emergency Team (NPHET) on Tuesday.

Mr Martin justified the decision in light of recent coronavirus figures which have seen the 14-day incidence of cases triple in the last month.

“I know that this will come as a blow to pub owners and I want them to know that I have enormous sympathy for their plight,” said Mr Martin.

“This virus is taking away their ability to earn a living.”

Tánaiste Leo Varadkar said Ireland had lost some ground in its battle with coronavirus. “The truth is the pandemic is blazing around the world. In fact it is worse than ever,” he said.

In a joint statement on Tuesday, the Licensed Vintners Association (LVA) and the Vintners Federation of Ireland (VFI) said publicans were now in “fury and despair”, and called for “immediate” aid.

“This is Groundhog Day for the trade as twice now the reopening of pubs has been postponed,” said VFI chief executive Pádraig Cribben. “The Government has effectively denied pubs the ability to trade. As a result it will have to provide substantial supports to our members, many of whom are deeply agitated at what they feel is the State abandoning a vital part of the hospitality sector.”

Donall O’Keeffe, chief executive of the LVA, said pubs have been abandoned: “We’re repeatedly being told that opening the pubs ‘could lead to an increase in the virus’. Well, when will that not be the case?”

The 25,000 people working in pubs now faced “intolerable pressure”, said the bodies, who complained about a lack of guidance from the Government or reassurance about the future.