As a small state with a highly mobile people, a local approach may undermine community spirit 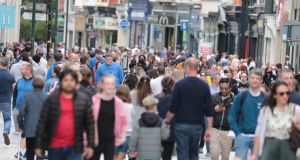 Prof Anthony Staines of DCU says Dublin poses a challenge to a local approach – should it be limited to the county boundary or should it cover the greater metropolitan area? Photograph: Collins

Across the world, in countries wrestling with a resurgence in Covid-19 cases, local lockdowns are increasingly forming part of the response by governments.

In Ireland, too, there have been calls for a regionalisation of approaches so that the pain involved in continuing with, or even reimposing, restrictions would be felt by fewer people.

This might allow pubs in Dingle to open, for example, but not in Donnybrook; or it might impose a curfew in one county, but not its neighbour.

But could such an approach work in the Republic, a small state with good internal travel links that are heavily used (particularly in holiday time during the summer)? And even if it would work, is it the appropriate response when up to now the job of suppressing the virus has been a collective effort based on community spirit and an understanding that the pain involved was being shared?

In Australia, lockdown restrictions – known there as phase four – were imposed on Melbourne last Sunday. Residents are permitted to go outside only for essential trips such as food shopping or exercise, mask-wearing is mandatory in all public settings and an 8pm curfew has been imposed.

Stage three restrictions, the next most severe category of measures, are being imposed in the wider state of Victoria from Thursday.

In the UK, meanwhile, restrictions were reimposed on millions of people in northern England in recent days following a spike in cases, while Aberdeen in Scotland has also been put back into lockdown.

In most cases, administrators have justified the lockdowns by saying harsher medicine now will work better than a gentler response over time. The Victorian premier, for example, said the alternative to stage four restrictions for six weeks was stage three measures for six months.

Here in Ireland, public health officials have considered introducing local measures at various points over the past six months, but have on each occasion backed off such a move.

Their reasons varied at different stages of the pandemic. There was no need for local measures during the lockdown, which was national and enjoyed widespread public support.

Aside perhaps from Dublin, there doesn’t seem to have been huge variations in the incidence of the disease in different areas of the country, though the data published is incomplete.

Ultimately, Co Cavan has ended up with a higher cumulative incidence of Covid-19 than Dublin, due possibly to outbreaks in local nursing homes and the local hospital.

The total number of cases in an area, whether cumulative or in the previous 14 days, is less important, arguably, than the proportion of cases which involve community transmission.

Co Kildare, for example, is recording the highest incidence in the country, but most of its new caseload relates to two outbreaks in local factories. The figures don’t tell us what the relative risk is of walking down the main street of Naas compared to, say, Newbridge.

Irish scientists calling for a zero-Covid national policy have suggested that “internal green zones” could be created out of counties that have effectively suppressed community transmission. These counties would benefit from lighter restrictions while other counties with higher rates of infection would be subject to greater restrictions until their figures improved.

Prof Anthony Staines of DCU, who advocates this approach, acknowledges that Dublin poses a challenge – should it be limited to the county boundary or should it cover the greater metropolitan area?

The World Health Organisation says there is a role for regionalised approaches to limit the spread of the virus while allowing for economic activity to continue as much as possible. However, it says, you first have to look at the amount of mobility between areas, as well as the availability of localised data and response capacity.

It hardly needs stating that Ireland is a small country, with a highly mobile population internally and that county boundaries, while important on the GAA field, count for little in terms of people’s movement. And that’s before you even start to consider the national Border on the island.

Singling out a particular county, or even HSE region, for restrictions could also undermine the spirit of national solidarity that has sustained the country through the pandemic. For these reasons, this approach is likely to be one of the last measures adopted to tackle any specific outbreak.

Or, as acting chief medical officer Dr Ronan Glynn has said, “in a small country, where people are moving across boundaries, it’s not as simple”.