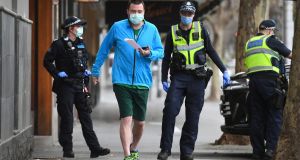 Police issue a fine to a man breaking lockdown laws in Melbourne on Sunday as the city struggles to cope with a Covid-19 outbreak. Photograph: William West/AFP

More than 19.8 million cases of coronavirus have been recorded worldwide with more than 731,300 deaths, according to the latest data from Johns Hopkins University. Global coronavirus cases have doubled in just six weeks, and have risen 200-fold since mid-March. Deaths have increased from more than 4,000 globally at the time of the World Health Organisation (WHO) declaration to more than 730,000 now.

There was, however, some evidence that drastic lockdown measures in the city of Melbourne were having an effect, with daily new infections in the state of Victoria slowing to a near two week low.

“I am more hopeful of that today than I was in the course of the past week,” Mr Morrison told reporters in Canberra, as he called on state leaders to co-operate to allow stranded residents to return home.

Australia’s federal political system has led to its eight states and territories taking different measures in response to the crisis, resulting in several internal border closures.

Victoria state, which is home to Melbourne, the country’s second biggest city and the epicentre of its second coronavirus wave, reported 19 people had died from the virus over the past 24 hours. With some other states still to report daily new case and death numbers, that already marks the country’s biggest single day rise in fatalities.

Melbourne, home to nearly 5 million people, has been in lockdown since early July, with people largely confined to their homes and business shuttered.

State premier Daniel Andrews said on Monday he understood frustrations but declined to put an end date on the lockdown.

“If I could paint you a picture that had any kind of reliability for next week, let alone five weeks away, then, of course, I would,” Mr Andrews said during a televised media conference.

With around 21,000 Covid-19 cases and 314 deaths, Australia has still recorded fewer infections and fatalities than many other developed nations.

It was considered a global leader early in the pandemic, when it was swift to close its international border, impose social distancing restrictions and implement mass virus testing.

But as the country began to reopen, community transmissions rose significantly in Victoria, where triple digit daily new cases have now been recorded for weeks.

Authorities worry the spike in cases in Victoria has already spread to other states despite borders border closures.

Australia’s most populous state, New South Wales, reported 14 new cases, and no deaths, on Monday. Twelve cases were linked to known clusters while another was a person in hotel quarantine after returning from overseas, leaving one case with no known links.

The number of confirmed coronavirus cases in Germany increased by 436 to 216,327, data from the Robert Koch Institute (RKI) for infectious diseases showed on Monday. The reported death toll rose by one to 9,197, the tally showed.

Britain reported 1,062 new positive tests for coronavirus on Sunday, the highest daily rise in new Covid-19 infections since late June, at a time of new local lockdowns in some areas and worries over a second wave of infections. Official data showed 1,062 people tested positive for Covid-19 on Sunday, going over the 1,000 new daily cases mark for the first time since June, and 304 higher than the 758 new cases reported on Saturday. British prime minister Boris Johnson said reopening schools in September was a social, economic and moral imperative.

France and Germany have quit talks on reforming the WHO in frustration at attempts by the United States to lead the negotiations, despite its decision to leave the WHO, three officials told Reuters.

Two members of Atletico Madrid’s group set to travel to Portugal for the Champions League quarter-finals have tested positive for Covid-19.

Parisians and tourists strolling along the banks of the River Seine or browsing open-air markets in the French capital must wear a face mask from Monday.

In Greece, authorities announced a record daily number of 203 new coronavirus cases, with one death. The total number of cases is now 5,623, with 212 deaths. Greece introduced an early lockdown in mid-March which buffered the country from the devastating effects of the pandemic seen in many of its European counterparts.

Brazil reported 23,010 new cases of the novel coronavirus and 572 deaths from the disease caused by the virus in the past 24 hours, the health ministry said on Sunday. Brazil has registered 3,035,422 cases of the virus since the pandemic began, and the official death toll from Covid-19 has risen to 101,049, according to ministry data. Brazil’s coronavirus outbreak is the world’s worst after the United States.

China reported on Monday 49 new coronavirus cases in the mainland for August 9th, compared with 23 cases a day earlier, the health authority said. The National Health Commission said in a statement 35 of the new infections were imported cases. There were no new deaths.

On Monday New Zealand has reported its 101st day in a row with no recorded community transmission of Covid-19 from an unknown source. All 21 active cases of the coronavirus have been diagnosed in travellers returning to New Zealand from other countries; all of them are in quarantine at the government’s managed isolation facilities. There were no new cases of the coronavirus recorded in the quarantine hotels on Monday.

The US Centers for Disease Control and Prevention (CDC) on Sunday reported 4,974,959 cases of the new coronavirus, an increase of 54,590 cases from its previous count, and said that the number of deaths had risen by 1,064 to 161,284. The CDC reported its tally of cases of the respiratory illness as of 4 pm eastern time on August 8th versus its previous report a day earlier.

The country’s top infectious diseases official offered hope last week that an effective vaccine might be available by year-end. With one out of every 66 residents infected, the United States leads the world in Covid-19 cases, according to a Reuters analysis. The country has recorded more than 160,000 deaths, nearly a quarter of the world’s total.

Mexico’s health ministry reported on Sunday 4,376 new confirmed coronavirus infections and 292 additional fatalities, bringing the total in the country to 480,278 cases and 52,298 deaths. Officials have said the real number of infected people is likely significantly higher than the confirmed cases. Mexico has started getting people back to work again in August after losing 1.1 million formal jobs between March and July.

Cuba placed Havana back on a strict lockdown on Saturday following a rebound in cases.

Researchers may have found a missing link in the coronavirus reproduction cycle that could potentially be targeted by drugs, while two new studies found people who had received non-Covid vaccines developed fewer or less serious infections. –Agencies