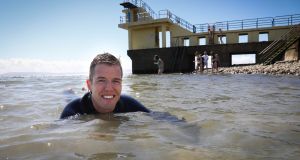 Dr Liam Burke at Blackrock, Salthill in Galway, is one of a team of researchers at NUIG who are exploring whether recreational waters are carrying potentially deadly bacteria that is not routinely tested for. Photograph: Aengus McMahon/PA

Academics are recruiting 300 people for a study seeking to establish if Ireland’s sea-swimmers and surfers are more prone to spreading potentially lethal superbugs.

However, because bathing waters are routinely tested for some bacteria but not for antibiotic resistant bacteria, the extent of the problem is not fully known.

Dr Liam Burke, a microbiologist at NUI Galway who is working on the new study, says a team of investigators will examine whether those taking a regular dip are contributing to outbreaks of superbugs like Carbapenemase Producing Enterobacteriaceae (CPE).

“We know there are some bugs in the sea and we just want to see whether people are at risk of picking them up and whether they are carrying them in their gut,” he told The Irish Times.

“If people are carrying them in their gut, they are likely to be spreading these bugs around in their homes and workplaces. The threat is if the bugs get to vulnerable people — it is a little bit like the Covid situation.”

CPE is the newest in a long line of bacteria that are extremely difficult to kill with antibiotics.

It lives harmlessly in the gut of healthy people but can be deadly if it gets into the bloodstream or bladder, which is most likely to happen to those with weaker immune systems, including the sick, the very young and the very old.

Superbugs can transfer easily from healthy people to vulnerable people.

Dr Burke said such superbugs are causing “real problems in hospitals” and outbreaks — mainly in hospital wards — has been increasing in Ireland and worldwide in recent years.

Two years ago there were two outbreaks of the CPE superbug in Cork University Hospital.

The study, funded by the Environmental Protection Agency, will involve two cohorts: a group of 150 sea swimmers, surfers and people who regularly bathe in the sea, lakes or rivers; and a second group of 150 people who rarely take to the water.

Recruits will be sent a kit in the post in which to return free-of-charge a tiny faecal sample and short survey. Anyone aged 18 or over who lives on the island of Ireland can sign up to take part on the website.

The research team hopes their findings will help improve policy on environmental monitoring of antibiotic resistance and the release of effluent and other sources containing superbugs into natural waters.

1 How one couple’s weekend away resulted in 30 Covid-19 cases
2 Taoiseach tells TD to ‘cop on’ over criticism of contact tracers asking about pubs
3 Miriam Lord: Government’s latest comedy of errors offers little to laugh about
4 Colleges may have to create 1,000 extra places after Leaving Cert errors
5 ‘Mathematics seems too often to be about learning rules’
Real news has value SUBSCRIBE