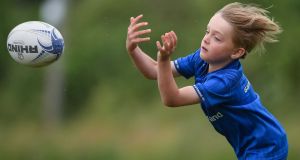 Eoin McGuire, age 8, in action during the Bank of Ireland Leinster Rugby Summer Camp at Greystones, Co Wicklow on Thursday. Acting chief medical officer Ronan Glynn said that in some circumstances parents would be permitted to watch their children’s sporting matches from the sidelines. Photograph: Matt Browne/Sportsfile

The lockdown of Laois and Offaly can be lifted but the restrictions in Kildare to stem the spread of coronavirus should continue, the National Public Health Emergency Team (NPHET) has recommended.

The State’s health experts handling the response to the pandemic have advised the Government that Kildare’s lockdown should not be lifted due to the large number of cases still in the county.

The Cabinet will decide on the recommendation at a meeting on Friday.

Fine Gael TD for Laois-Offaly and former government minister Charlie Flanagan, who criticised the lockdown of the three counties earlier this month as “draconian”, welcomed the recommendation that activities can be widened across his constituency from next week.

Speaking on Thursday, Dr Ronan Glynn, the State’s acting chief medical officer, would not comment on NPHET’s advice to Government on the lockdowns, which were imposed two weeks ago and are due to expire on Sunday.

They were the first regional restrictions of the pandemic and introduced in response to a surge in cases linked to meat and food plants in the region.

Dr Glynn thanked the people of the three counties for their efforts, but he provided figures which showed the number of new infections in Kildare still remains high.

Actions taken by the public in the counties had helped “protect the rest of the country” from the spread of the virus, he said. He acknowledged that it was “an incredibly difficult set of measures for one part of the country to have to accept”.

“I am very, very satisfied with the buy-in and the willingness of the people within those counties to adhere to the guidelines,” he said.

NPHET reported a further 136 cases of coronavirus and one more death on Thursday.

Prof Philip Nolan, chair of NPHET’s modelling group, said the R-number, which is the reproductive rate of the virus, has now fallen to about 1.2, a figure that shows it is still spreading.

It had increased to 1.6 earlier this month following a number of “explosive outbreaks” in sites such as meat plants, he said, but was now falling.

A study carried out in June and July found the national prevalence of Covid-19 was estimated to be 1.7 per cent of the population.

This meant three times more people had contracted the virus than had been recorded in the number of confirmed cases.

Dr Derval Igoe, the principal investigator on the study, said this showed “the vast majority” of the population remained susceptible to the virus.

Clarifying new public restrictions introduced on Tuesday, Dr Glynn said that in some circumstances parents would be permitted to watch their children’s sporting matches from the sidelines.

Under new restrictions announced this week, the Government directed sporting matches must take place behind closed doors without spectators.

“If parents need to be on the sideline for a training session or a match for younger kids, if they need to be there for guardianship purposes, for child protection purposes . . . We’ve no problem with that,” he said.

It has also emerged that many schoolbuses are likely to operate without social distancing when schools reopen, despite new public health advice that secondary students should maintain a safe distance while on board.

NPHET advised the Government this week that secondary students should physically distance and wear face coverings while on schoolbuses, in line with wider rules on public transport.

The Department of Education said on Thursday there would be a “rolling implementation” of these new guidelines to provide for physical distancing on secondary school bus services.

Meanwhile, Norway added Ireland along with the UK, Austria and Greece to a list of countries from where visitors must undergo a 10-day quarantine on arrival after the rise in Covid-19 cases.