Kildare should stay in lockdown but not Laois and Offaly, says NPHET 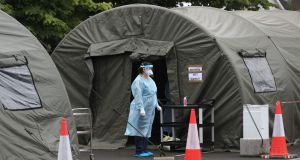 The lockdown of Laois and Offaly can be lifted but the restrictions in Kildare to stem the spread of coronavirus should continue, the National Public Health Emergency Team (NPHET) has recommended.

The State’s health experts handling the response to the pandemic have advised the Government that Kildare’s lockdown should not be lifted due to the high level of cases in the county.

NPHET declined to say how it had advised Government to act in relation to the unprecedented lockdown of the three counties, imposed two weeks ago and due to lapse on Sunday.

There has been a substantially higher number of Covid-19 cases reported in Kildare compared with the infections in Offaly and Laois since the local lockdown was announced in response to a surge in the number of cases linked to meat processing and food production companies in the area.

Political sources confirmed the State health team’s advice to Government following their meeting on Thursday. The Cabinet has yet to sign off on the recommendation at a meeting on Friday.

Fine Gael TD for Laois-Offaly and former government minister Charlie Flanagan, who criticised the lockdown of the three counties earlier this month as “draconian”, welcomed the recommendation that activities can be widened across his constituency from next week.

Speaking on Thursday, Dr Ronan Glynn, acting chief medical officer, said he would not comment on what NPHET’s advice to Government had been on the local lockdowns.

The actions taken by the public in those three counties had helped to “protect the rest of the country” from the spread of the virus, he said.

“I am very, very satisfied with the buy-in and the willingness of the people within those counties to adhere to the guidelines.”

Dr Glynn said that it was “an incredibly difficult set of measures for one part of the country to have to accept given that it came so quickly, and given that it hadn’t happened previously.”

“It’s clear that people all across those three counties have made a very significant effort to comply over the past number of weeks, and my message tonight is to say thank you for doing that,” he added.

Laois and Offaly will still be subject to the same public restrictions limiting indoor and outdoor contacts with others that were announced by the Government on Tuesday.