Coronavirus: 136 further cases and one more death in the State

Covid-19 advice is based on a ‘very simple’ message, says acting CMO

Acting Chief Medical Officer, Dr Ronan Glynn says that patients under the age of 45 make up 72 per cent of Covid-19 cases over the past 14 days as he confirms 136 new cases in the State. Video: RTÉ 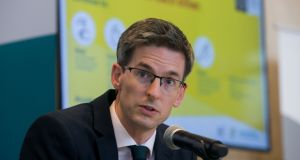 There have been a further 136 cases of coronavirus confirmed in the State and one more death, the National Public Health Emergency Team (NPHET) has said.

NPHET met on Thursday discuss the possible lifting of the restrictions on the three midland counties which were introduced earlier this month.

Sources said the increase in cases appears to have been controlled in Laois and Offaly, but the figures in Kildare remained worryingly high.

Of the 136 new cases, 51 were in Dublin and 24 in Kildare, with Tipperary having the next highest number at 11.

It is understood an announcement on whether restrictions will be lifted in the three midland counties will not be made until Friday.

In Northern Ireland 51 new cases of coronavirus were reported on Thursday, bringing the total number of people who have tested positive for the virus in the North to 6,556.

The daily total compares to 34 new cases reported on Wednesday, and 41 on Tuesday.

No further fatalities were reported, and the total number of coronavirus-related deaths recorded by the North’s department of health remains at 559.

Earlier, Taoiseach Micheál rejected the claim that there was mixed messaging emerging from the Government and public health experts.

“There is no confusion about the fundamental issue here. I would advise everybody to examine [the advice of] Ronan Glynn, the chief medical officer in his video presentation,” said Mr Martin.

In the video, posted on Wednesday evening, Dr Glynn said “I know that there’s been a lot of talk and commentary about the measures that were recommended [on Tuesday] and many people are confused about what they should be doing, but at the heart of what we want to do is a very simple message.

“Please limit the number of people that you are meeting up with over the next three weeks. Please do not have more than six people over to your house or garden. Outside no more than 15 people should meet up and even then, people need to be physically distance from one another.”

He added: “You can still play sport, you can still go to a restaurant and meet your friends and family but we are asking that you do this in as safe away as possible.”

He said that outbreaks in workplaces and direct provision centres were “just part of the story”.

Public health doctors were particularly concerned about the number of close contacts as a result of “socialising around sporting activity, house activities... social engagements and car sharing”, he said.

Speaking on Wednesday night, Minister for Health Stephen Donnelly acknowledged that parents were worried about sending their children back to school in the coming weeks but added that the coronavirus situation was now about managing risk.

“We manage risk in our lives everytime we get into a car. Driving a car is an inherently risking thing to do. So we have seatbelts, we have rules of the road and we have all of these things,” he told Virgin Media News.

Asked if he was equating the risk of Covid-19 with the risk of being in a road traffic incident, he said: “People die on the roads. The risk [of coronavirus] is not necessarily much higher.

“This is about recognising that there are things we do in life that carry a risk and we’ve got to manage that risk and unfortunately until we’ve got a vaccine widely distributed for covid-19, that is the case,” he added.

Meanwhile, key employers in the tourism sector have called on the Government to consult it before publishing the next iteration of the roadmap for reopening Ireland.

In response to the Government decision to publish a new “ Roadmap for Resilience and Recovery”, by September 13th, the Irish Hotels Federation said “people must have livelihoods”.

The sector which was disappointed by the latest restrictions on social gatherings said public health should go hand-in-hand with ensuring a viable economy when the pandemic had passed.

However latest figures for the hotel and guesthouse sector show that occupancy levels reached just 42 per cent for July and 49 per cent so far in August, the peak months for tourism. This compares to an average of 90 percent last year.

Average occupancy levels of 23 per cent for September and 17 per cent for October are now being reported by the industry, based on current bookings.

“ What is necessary is an active, intensive and sustained public policy support framework to steer the tourism and hospitality industry through the crisis.”

Ms Fitzgerald Kane said the sector should be consulted on the Government’s forthcoming strategy which she said must include a comprehensive testing, tracing and monitoring regime.