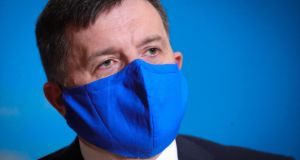 Tighter restrictions on the number of people allowed to meet indoors and outdoors are to be reintroduced in the North from next week to limit the spread of coronavirus.

Gatherings in private homes are to be reduced to a maximum of six people from two households, while the number of people who can meet outdoors, including in a private garden, will be limited to 15.

Exemptions will apply to certain events, including weddings, church services and sporting events, as long as a risk assessment is carried out and social distancing and hygiene measures are implemented.

The new limits were unanimously approved by Ministers at a meeting of the Northern Ireland Executive on Thursday afternoon. They also agreed to pause any further lifting of restrictions.

“These are not decisions I want to take but decisions I had to take,” the North’s Minister for Health, Robin Swann, told reporters at a press conference following the meeting.

“Unless we take action now I fear it would soon have been too late to arrest further extensive spread of the virus.”

He expressed his concern about the spread of coronavirus due to indoor gatherings, “whether that be licensed premises or house parties”. He also said focused police enforcement action would be directed at “hotspot” areas of infection.

Cases of Covid-19 have been rising in the North in recent weeks, with the reproductive – or “R” – number of the virus now estimated at about 1.3.

An additional 51 cases were reported by the North’s Department of Health (DoH) on Thursday, bringing the total number of people who have tested positive for the virus in the North to 6,556.

No further fatalities related to the disease were reported, leaving the total number of coronavirus-related deaths recorded by the department at 559.

Mr Swann confirmed on Thursday that 35 members of staff at a meat processing plant in Cullybackey, Co Antrim, as well as a smaller number of their recent contacts, have been diagnosed with coronavirus, in what he described as a “significant” and “extensive” outbreak.

The Cranswick Country Foods plant, which processes pigs, is to close temporarily to allow staff to self-isolate following the outbreak among its staff. All staff and their close contacts are to be tested, and the factory is to be deep-cleaned, the company said.

“The health and safety of all of our colleagues has always been our number one priority and we have done everything we can to protect our team,” it said in a statement, adding that from the outset of the pandemic it had implemented protective measures including social distancing, the wearing of PPE and additional cleaning and hygiene policies.

The trade union Unite said it was seeking “urgent clarification” from the company regarding its plans to ensure safety when the plant reopens, as well as assurances that workers will not lose any pay while self-isolating.

A total of 79 cases of Covid-19 have been confirmed in the Mid and East Antrim council area, which includes Cullybackey, in the last seven days, the greatest such number of any council area in the North.

The Minister said he expected the number of cases in the area to rise once the tests are carried out at the plant, and that a lot of the other cases were associated with known outbreaks which had been successfully identified through contact tracing.

While Ministers agreed localised measures may be needed in the future to halt the spread of the virus, Mr Swann said there was “nothing at this minute in time in regards to community transmission that would see us looking to localised lockdown in Mid and East Antrim”.

Mr Swann also criticised the “armchair experts who think they know more than the actual experts” and said he needed to address a “growing problem” of some people “dismissing the figures and becoming increasingly flippant in regards to the impact of this virus”.

He said if people acted responsibly and followed the regulations and public health guidance, the reimposition of further restrictions was not inevitable.

“We can still avoid the return to a lockdown if we all do the right thing. We can fight back against Covid-19 because we know what needs to be done,” he said.

The North’s chief medical officer, Dr Michael McBride, said the Covid-19 pandemic was “far from over” and there would be “many more difficult judgments and decisions to make in the weeks and months ahead”.

Given the increasing number of cases, he said, “we all must take concerted and determined action to keep a lid on this virus”.

Meanwhile, a man in his 40s was arrested in the Newtownards area of Co Down on Thursday as part of an investigation into threats made against Mr Swann on social media.

Asked about the threats at the media briefing, Mr Swann said he felt they were serious enough that it was “necessary to inform the appropriate authorities”, but he would “rather people direct that frustration and anger at me as Minister, than at the health service workers or at those frontline workers”.

Stephen Donnelly defends analysis of Twitter mentions by his department