The Irish Times view on the nursing homes expert panel report: 'What were we to do?' 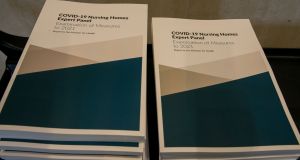 ‘What were we to do?” The question asked by a staff member at a nursing home that had seen three residents die from Covid-19 in 12 hours and another three within a further 48 . The quote, from Thursday’s 200-page report of the nursing homes expert panel, captures the sense of despair of the whole sector.

The report covers well the devastation caused by the pandemic on nursing homes and the emotional toll the illness, fatalities and associated lockdown had on staff, residents and their relatives during the depth of the crisis in these care facilities in March and April.

Nursing homes account for 56 per cent of more than 1,700 total virus deaths in the State, and the report describes the experience of some homes suffering so many deaths coming so quickly after each other, as “both shattering and frightening.”

The State must ensure far greater oversight into what happens in all nursing homes, including the privately owned facilities

The authors, led by UCD’s Prof Cecily Kelleher, rightly stress the pandemic’s psychological effect and that staff “now need to be supported and cared for.”

The report seems largely to concede there was little that could be done to prevent the virus getting into vulnerable, congregated settings populated with elderly people deeply susceptible to catching the virus and dying given how novel it was and its initially-unknown asymptomatic spread.

There is little analysis - or indeed criticism - of the HSE’s decision not to test all those being transferred from hospitals to long-term residential care facilities until June 19th, long after the damage was done and Covid-19 clusters had reached more than 200 nursing homes.

The assessment that the pandemic peaked in nursing homes in late April seems strange too when the accurate case count was only known after mass testing was belatedly ordered from April 17th. The report is careful not to point a finger of blame in determining what more could have been done to prevent the virus getting into nursing homes.

There are stronger forward-looking recommendations, which should help prepare nursing homes for the coming winter. These include single-site employment contracts to stop staff moving between homes, and testing for all those transferred from hospitals before admission to a nursing home.

Increased integration into the wider health system and the need for greater transparency of operation, funding and finances of private and voluntary nursing homes, which make up 80 per cent of the 576 homes in the State, are among the most important recommendations.

The State must ensure far greater oversight into what happens in all nursing homes, including the privately owned facilities, to ensure that what happened this year is not repeated.