Italy reports highest daily rate of coronavirus cases since May 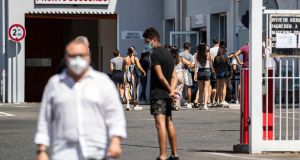 A queue for swab tests for coronavirus at the Padre Pio hospital in Bracciano, near Rome. Italy reported 845 cases in the last 24 hours. Photograph: Massimo Percossi/EPA

Italy reported 845 new coronavirus infections in the past 24 hours, the health ministry said on Thursday, marking the highest daily increase since May, when the government eased its rigid lockdown measures.

Italy, one of Europe’s worst-hit countries, managed to contain the outbreak after a peak in deaths and cases between March and April. However, it has seen a steady increase in infections over the last month, with experts blaming gatherings of people associated with holidays and nightlife.

Last time the country recorded a higher figure was May 16th, with 875 cases, two days before restaurants, bars and shops were allowed to reopen after a 10-week lockdown.

The numbers of new infections remain considerably lower than those recently registered in other large European countries, with Spain and France both close to 4,000 new cases a day.

Italian cases are still mainly concentrated in the northern regions at the epicentre of the outbreak discovered in late February, with Lombardy and Veneto both above 150 on Thursday.

Lazio, around Rome, registered 115 cases of which 73 per cent were due to people returning from other Italian regions or from abroad, the regional government said.

Italy has taken countermeasures to try to stem the recent uptrend, shutting down clubs and discos and making it compulsory to wear a mask at night in outdoor public spaces.

Travellers from several non-EU countries have been banned from entering Italy, with restrictions and testing obligations imposed on people returning from hard-hit European countries.

The French health ministry reported 4,711 new coronavirus infections over the past 24 hours, a new post-lockdown record and a level last seen during the height of the epidemic in France.

The infection rate has been soaring in the past few days, but the number of people in hospital with Covid-19 has been relatively stable and the numbers of new deaths per day have also been stable in the low double digits. Twelve new deaths were reported on Thursday.

Cases increased by 1,586 in the 24 hours through Thursday morning, compared with a gain of 1,420 a day earlier and 1,693 on Tuesday, according to data from Johns Hopkins University. That brought the country’s total number of confirmed cases to 229,706. Eight additional fatalities from the virus were reported, taking the country’s total death toll to 9,249.

Travellers to the UK from Croatia, Austria and Trinidad and Tobago will have to quarantine for 14 days on their return to the country, it was announced on Thursday.

Transport secretary Grant Shapps announced the measures would come into effect from 4am on Saturday. Meanwhile, passengers arriving in the UK from Portugal will no longer have to self-isolate, after it was added to the travel corridor list.

The UK government also reported six further deaths from Covid-19, bringing its total official death toll from the disease to 41,403. The government also said that as of 9am on Thursday, there had been a further 1,182 lab-confirmed cases of coronavirus in the UK. Overall, 322,280 cases have been confirmed there.

Rest of the world

India has recorded its highest daily total of new cases, with 69,672 infections. This is the fourth-highest daily total reported globally, only exceeded by the US on three occasions in the second half of July. Total cases in the country now number 2.84 million, data from the federal health ministry showed. Total deaths stand at 53,886.

India is the worst-hit country in Asia in the pandemic and third only behind the US and Brazil in terms of numbers of infections.

Nearly 30 per cent of residents in India’s capital, New Delhi, have had the novel coronavirus, according to a seroprevalence study of more than 15,000 people conducted by the state health authorities.

Coronavirus cases in the US now stand at 5.55 million, according to data collected by Johns Hopkins University and Bloomberg News, while its death toll from Covid-19 is now 173,699.

Initial jobless claims in regular state programmes in the US rose to more than 1.1 million last week, even after analysts forecast a decline, fresh evidence that the US labour market recovery from the pandemic will occur in fits and starts. – Reuters/PA/Bloomberg