Oireachtas climate committee should not be ‘flash in the pan’ 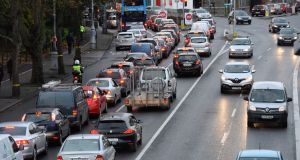 An Oireachtas committee’s efforts to tackle rising carbon emissions will amount to “a flash in the pan” if it is dissolved in January, according to an environmental policy expert.

A strong, resourced climate action committee in parliament was critical and one the key ways of ensuring stronger governance in responding to climate change, Dr Diarmuid Torney of Dublin City University told a conference in Dublin on Thursday.

The Oireachtas committee on Climate Action which was established in July is due to be disbanded in January after considering how to implement radical recommendations of the Citizen’s Assembly and reporting on what should be in the National Energy and Climate Plan.

The plan must be submitted to the EU by the Government, on how Ireland will respond to climate change over the coming decade.

It was also suggested recently that the committee might act as a forum in an attempt to forge an all-party consensus in setting a trajectory for rising carbon taxes up to 2030.

“I think it would be a shame if it’s a flash in the pan, it reports in January and is dissolved; never to be seen again,” Dr Torney added. “We need strong parliamentary oversight of the executive’s performance on climate change. This could be provided through a permanent Oireachtas committee. It need not be a flash in the pan. Such a permanent committee should be staffed and resourced properly.”

While there was a Climate Change Advisory Council (CCAC) in Ireland which advises the Government, it had limited resources, he said. The UK climate advisory committee had a staff of 30 people, and helped set a carbon budget every five years, regardless of change in government – it has coincided with major reductions in carbon emissions.

The Republic’s climate governance arrangements were not robust enough compared with other countries, while long-term targets for decarbonisation up to 2050 were not enshrined in law, he told the Political Studies Association of Ireland conference.

Irish climate law was particularly weak and while Minister for Climate Action Richard Bruton had flagged a move to a “whole of Government” response, it needed to be further strengthened through political oversight.

This could be achieved by “a permanent Oireachtas committee” combined with greater stakeholder and citizen involvement, either through an enhanced national dialogue process or a modified ongoing citizens’ assembly process – or both”.

The 2015 Climate Action Act established the CCAC which has done important work to date, he said. “However, without targets for decarbonisation it doesn’t really have a benchmark against which to measure Ireland’s progress.”

In reversing the trend of rising emissions, there was a critical need for political leaders “who are willing to spend political capital on climate change. History will not look kindly on politicians of this generation who talk a good game but fail to deliver”, he said.

CCAC chairman Prof John FitzGerald said climate policy was like no other. Politicians traditionally go out at election time to sell a policy “that will be better for you. In climate change, action taken today will have limited effect in the next five years. It is my grandchildren and great-grandchildren who will benefit from actions taken today,” he added.

Asked if he favoured going the carbon budget route or setting long-term targets in legislation, he said, “carbon budget every time”, as the UK model had proved to be so effective. The problem was the Government had a climate objective “but don’t [have] policy measures to make it happen”.

Cross-government co-ordination was a problem in Ireland, he said. Setting up the new Department of Communications, Climate Action and Environment meant expertise moved to the Department of Housing, which “set climate policy back at least two years in terms of doing something”, he believed.