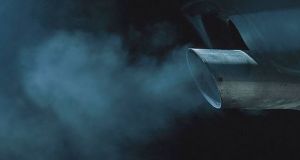 In urban areas transport-related emissions of nitrogen-dioxide arising from fossil-fuelled vehicles are close to the EU limit, and continue to pose the biggest threat as Ireland is often above the health-related and tighter WHO and EEA guidelines. Photograph: Getty Images

The burning of solid fuel for home heating across the country and emissions from transport in large urban areas are the main threats to good air quality in Ireland, according to the European Environment Agency (EPA).

Irish emissions may not have exceeded EU air quality standards during 2017 but often exceeded stricter World Health Organisation (WHO) guidelines, the EPA warns in its annual air quality report.

The resulting pollution is contributing to 1,150 premature deaths in Ireland which “are directly attributable to poor air quality”, according to European Environment Agency (EEA) estimates.

These deaths are mainly due to fine particulate matter pollutants arising from solid fuel burning in households, the EPA concludes.

“Our home heating and transport choices directly influence the level of pollution in the air around us. This pollution affects people’s health and life expectancy,” the report released on Tuesday finds.

It shows that while Ireland’s air quality did not exceed legal limit values, air quality is impacting negatively on people’s health.

Levels of particulate matter – tiny dust particles – is of growing concern, it concludes. Levels are particularly high during winter months when people’s use of solid fuels such as coal, peat and wood impacts on air quality and on health, especially in small towns and villages.

In urban areas transport-related emissions of nitrogen-dioxide arising from fossil-fuelled vehicles are close to the EU limit, and continue to pose the biggest threat as Ireland is often above the health-related and tighter WHO and EEA guideline values.

EPA director general Laura Burke said: “We all expect that the air we breathe is clean, but we cannot take this for granted. It is now time to tackle the two key issues impacting negatively on air quality in Ireland – transport emissions in large urban areas and emissions from solid fuel burning across the country.”

She said while Ireland met all legal standards for air quality in 2017 at EPA monitoring stations, levels of air pollution caused by burning solid fuel, including “backyard burning” and by transport at some locations, were above the WHO guidelines.

“The choices we all make as individuals affect the levels of pollution in the air we breathe, which have an impact on people’s health and life expectancy.”

Speaking at an EPA event in Kilkenny last week, François Wakenhut from the European Commission’s Clean Air Unit highlighted the issue of premature deaths occurring in Ireland each year due to fine particulate matter.

“There is an increasing awareness of the urgencies of air quality; people demand from government that we do more to deliver clean air. The EEA have estimated 1,150 premature deaths in Ireland are directly attributable to poor air quality, that is too many for Ireland, and demands action.”

Concentrations of carcinogenic polycyclic aromatic hydrocarbons (PAHs) were above EEA reference levels in a small number of instances.

Levels of dioxins which can arise in heavy industry or due to incineration remain at a consistently low level.

PAHs and ozone are problem pollutants across Europe, including Ireland. The dominant source of ambient air emissions of PAH in Ireland is solid fuel burning.

Ireland was above WHO guideline values for ozone in 2017. This trans-boundary pollution reaches Ireland when certain weather conditions carry polluted air masses from the major cities of western Europe.