Could you fit a year’s waste in a little jar? Bea Johnson can, and her message is one that Irish towns are beginning to follow 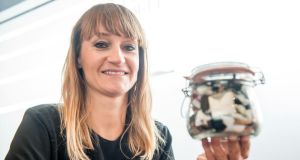 Clean living: Bea Johnson with the waste that her family produced in a year. Photograph: Philippe Huguen/AFP/Getty 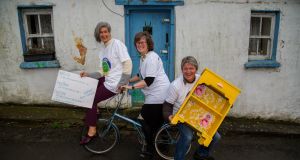 Do you buy stuff because you need it or just because you want it? Do you think about the amount of clothes, furniture, books and even food that you’ve accumulated? Do you regularly embark on enormous cleaning sprees to declutter your home? Questions like these are more common as initiatives to combat waste gain momentum – and living sparsely has even become fashionable in some circles.

This month three significant events – the launch of the Environmental Protection Agency’s food-waste charter, the beginning of an 18-month project in Cashel, Co Tipperary, to become a zero-waste community, and the visit of the zero-waste advocate Bea Johnson to Dublin – created an excitement around reducing waste that arguably hasn’t been seen here before.

Johnson, a French woman based in California, is a pioneer of the zero-waste lifestyle. The Zero Waste Ireland Facebook group, which has more than 4,000 members, invited her to Dublin to change the way people think about waste.

Showing photographs of her sparse home, Johnson enthralled a packed theatre of zero-waste wannabes at Trinity College Dublin with anecdotes about her approach to zero-waste shopping, cleaning and living. Her book, Zero Waste Home, has been published in 15 languages, she gives talks all over the world, and she explains it all on her website and blog, at zerowastehome.com.

“We have five rules – refuse, reduce, reuse, recycle and rot – in that order,” she explained. She spoke about how she, her husband and their two teenage sons learned to refuse everything from free pens to party bags.

“It actually takes practice to say no to these things, but every time you accept something for free you are giving permission to create more,” she said.

The Johnson family learned the art of decluttering when they moved into a rented apartment while relocating.

“We only brought what was necessary to the rented apartment and realised we hadn’t missed 80 per cent of our belongings during that year. And you have more time for family, friends, picnics and hikes when you live with less.”

Johnson’s zealous approach to food shopping is possibly the most striking aspect of her zero-waste lifestyle. She brings cloth bags for dry goods, Kilner jars for meat, fish and cheese, and returnable bottles for juices and milk. She then returns home with no packaging waste and puts all her food in neat lines of jars and bottles in her pristine kitchen cupboards and smallish fridge freezer.

On trips abroad she encourages people to open bulk-buying shops, of the kind that offer everything from cereal, rice and pasta to spices and sweets loose, in big tubs that you take scoops from, rather than in packets, boxes or jar, which allow this form of zero-packaging food shopping to thrive.

Johnson also has a back-to-nature approach to cleaning products and cosmetics. In her blog she explains how she uses cocoa powder as blusher, bulk buys soap and detergents, and cleans her house with vinegar-based solutions. She is also an advocate of buying second hand and giving away stuff you don’t use. She avoids plastic as much as possible, as she claims that once it’s recycled into, say, a park bench, that park bench is no longer recyclable.

Her endeavours have reduced her household bills by 40 per cent and allowed her to create a new lifestyle – she charges up to €2,000 for each speaking engagement – in which she and her family gift themselves experiences rather than stuff and rent their home out when travelling abroad.

“When I started people said, ‘What you do doesn’t really matter. What really matters is what politicians and manufacturers do.’ But we’ve been able to prove the opposite,” Johnson says.

“Zero waste is a journey rather than a destination. In Ireland we throw away 333kg per person every year which goes to landfill or incineration. This pilot programme aims to reduce that waste by at least 25 per cent,” Mindy O’Brien of the environmental charity Voice Ireland, who is co-ordinating the project, syas.

Establishing how much waste the town currently generates will be a first step. “Cashel is a quintessential Irish town with a tourism element, so it could become a model that other towns can replicate. We already have inquiries from other places,” says O’Brien.

The separation of recyclables into paper and cardboard, on the one hand, and cans and plastic, on the other, will also be tested as a way of reducing the contamination of green-bins waste, which has been highlighted recently.

“The problem has been that people hide nappies and food in cardboard and paper, and we hope by separating it out this won’t happen,” O’Brien says.

Under its landfill directive the European Union wants to reduce biodegradable municipal waste by two-thirds compared with 1995 levels. That is now one of the driving factors behind the Environmental Protection Agency’s new food waste charter (stopfoodwaste.ie), which aims to halve food waste in Ireland by 2030. The expansion of the brown-bin scheme, which converts food and garden waste into compost, is seen as key to reducing food waste.

Speaking at the Forum on Food Waste, where the charter was launched, the Minister for the Environment said, “An average Irish household throws away about €700 of food every year. If food waste was a country it would rank behind only the United States and China in terms of greenhouse-gas emissions. There is enough food in the world, but because of our wastefulness and our inefficiency people still go hungry.”

In countries such as the Netherlands stores selling second-hand, or “pre-loved”, clothes, furniture and household appliances are now commercial businesses. Were they to start opening here we’d know that zero-waste lifestyles and communities were now more than whimsical personal choices or pilot projects.

Waste not want not: Five ways to discard less

2: Declutter your wardrobe, giving to charity shops anything you haven’t worn for a few years. We tend to use only about 20 per cent of the clothes we have at any one time.

3: Empty your garage, loft or attic. People who store their things when moving house often discard most of what they kept in storage when they finally return to claim it.

4: Buy second-hand furniture or appliances when you can. Consider community tool sharing, and use sharing sites such as Tryilo and WeShare Dublin.

5: Give the gift of experience, such as vouchers for restaurants, concerts, walking tours, adventure activities – the list is almost endless.