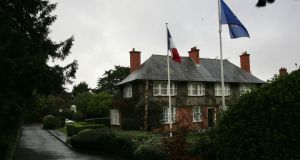 Shane Ryan, the son of Ryanair founder Tony Ryan, has secured planning permission for a major revamp of the former French consulate on Ailesbury Road in Dublin. The plan includes a subterranean 25m swimming pool and gym .

The French government had initially sought €20 million for the property when it was put on the market in 2008.

Mr Ryan – through his Ryan Partnership – has secured planning permission for the multi-million euro revamp of the home after assembling an international award-winning design team to revamp the home and garden.

The 1,080sq m (11,625sq ft) basement – which extends well beyond the footprint of the house – includes the addition of the swimming pool, gym, wine cellar, playroom, chef’s kitchen, tea room, laundry, bathroom and a garage to accommodate five cars.